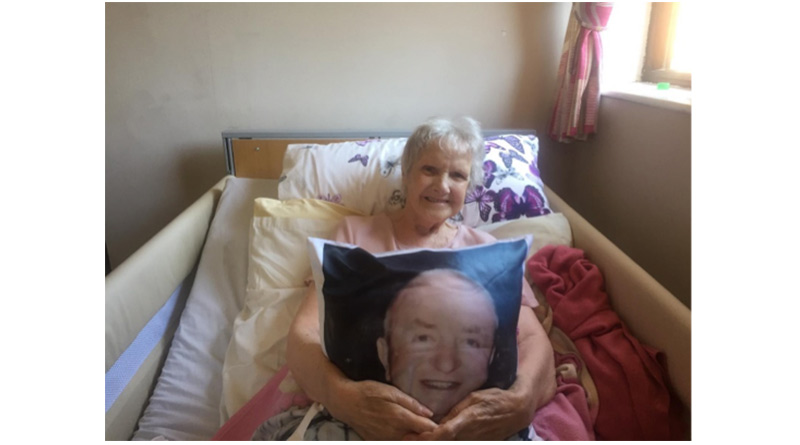 A care home resident has received a tear-jerking gift from staff at Hope House care home in Accrington.

Sheila O’Connor would go to sleep every night with a picture of her husband Anthony underneath her pillow. Each morning when she woke up, she found that his picture had fallen off the bed, so a carer at the home on Rishton Road bought her a pillow with the same picture on it.

Night carer at Hope House, Charmaine Douglas, noticed that the picture of Tony would often end up on the floor, so she decided to buy Sheila the pillow so that she could cuddle up to her husband’s picture whenever she wanted to.

One of Sheila’s former jobs was working at the Burco factory where they made pans and that is where she met her Tony. Sheila said she tried her best to avoid him at work and when they finally spoke to each other, they got on really well then went on to get married, and has been married to Tony for 48 years.

He drives by her window every day, to beep and wave at her. He always delivers gifts for her and writes a note saying from your secret admirer. Sheila has two children from a previous marriage which Tony has brought up as his own and they have two grandchildren.

Sheila said: “I was a little bit shocked when Charmaine gave me the pillow with the picture of my Tony on it, it was very thoughtful and I absolutely love it.

“The pillow brings back many happy memories that I shared with Tony, and it does pull on the heartstrings sometimes.”

Charmaine said: “I have a really close relationship with Sheila and spent many a night shift chatting with her about her husband, and I know how much he means to her, ‘my tony’ as Sheila says. That gave me the idea for the cushion so she could give him a cuddle every day, which she has throughout since the pandemic.”

Hope House forms part of Larchwood Care and is currently managed by Healthcare Management Solutions. The home is currently rated ‘Good’ by the CQC. Across the Larchwood portfolio, the regulator ratings reflect the exceptionally high standards of care given and the drive of every team member to continually improve the care they give.