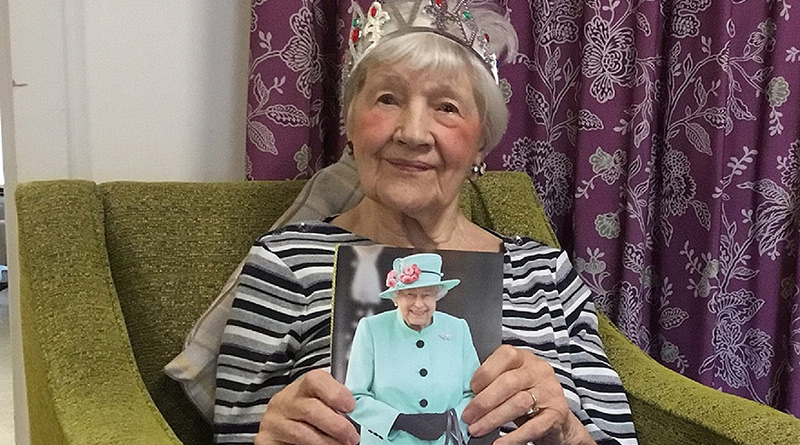 Gladys Wilson enjoyed a party at the Home with her family, fellow residents and staff. She was delighted to receive an official birthday card from Her Majesty the Queen.

She was presented with a birthday cake made by the Home’s chef, whilst everyone sang Happy Birthday!

Gladys was born in Purley Way on November 11th 1919 and has lived in Croydon all her life. Her birthday was the first Remembrance Day, one year after The Armistice was signed, putting an end to the fighting of the First World War.

Gladys grew up in Croydon and had a variety of jobs, including being a waitress, an assistant and working in a hospital. She married her husband John on July 8th 1939 and had a daughter. Sadly, John passed away in 1982. Gladys has a granddaughter and two great grandsons.

Reflecting on her life in Croydon during the second world war, Gladys recalls being at home and taking her daughter downstairs for safety while the bombing was going on. She said: “The upstairs stayed intact, but the downstairs ceiling fell down and we were up to our necks in rubble.”

Throughout her life, Gladys has been passionate about gardening and enjoyed doing lots of needlework.

Gladys, who has lived at James Terry Court since September, says that her secret to having a long life is: “will power! Even if I don’t feel like getting out of bed, I make myself get dressed and put on a bit of makeup.”

Asked if she has any advice for young generations, she said: “I’ve learnt in life to think nice thoughts if I’m feeling down, to deal with things as they come up and not to put anything off.”

Carol Roberts, Activities Coordinator at James Terry Court, said: “It was an honour to celebrate Gladys’s 100th birthday at our home. She’s is well loved by all of us, so we wanted to make it really special for her.”