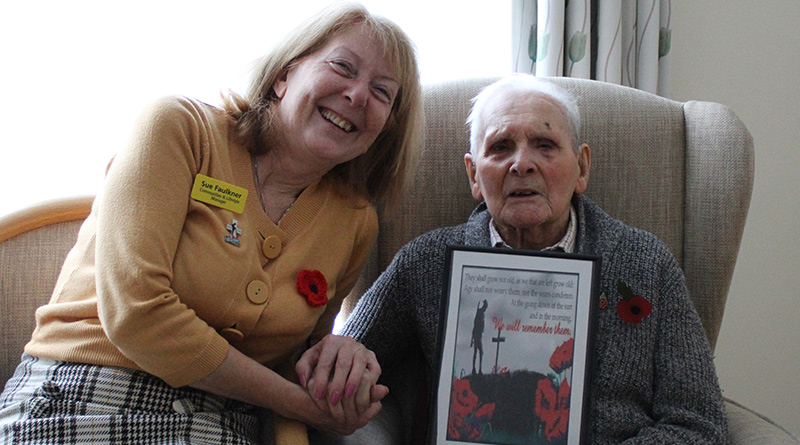 Axel’s research on ‘China’s Rise’ follows seven years of study in this area with both undergraduate and graduate degrees in Chinese language and cultural studies. His current research explores China’s ideological influence on the world order and, in his talk he focused on the origins and course of the First World War and some of the contentious debates around this.

Sir Aubrey Ward House, run by The Fremantle Trust, also invited residents from Cherry Garth (Holmer Green), The Heights (High Wycombe) and Lent Rise House (Burnham) – all of which are part of the Trust’s services for older people. Wartime exhibits were kindly provided by Marlow Museum to display around the care home as talking points for the special event.

Among the attendees was 97-year-old Arthur Holt (known as Archie), who served in the King’s Royal Rifle Corps and Rifle Brigade. During his time in the war, Archie was hit in the arm by shrapnel. He commented: “We all just did what we had to do – we had to get the job done.”

Two veterans from Cherry Garth also attended – Gordon Young and John Pearl. Gordon was a Sergeant in the Parachute and Middlesex Regiments who served in Korea and John was a Private in the Royal Mechanical and Electrical Engineers.

Commenting on the event, Axel said: “It was a privilege to come and speak with residents for this special occasion as I find it incredibly humbling meeting veterans of war.”

Sue Faulkner, community and lifestyle manager for The Fremantle Trust, added: “We were delighted to have the chance to hear Axel’s fascinating perspective on China’s link to the First World War. It was also a poignant opportunity to remember residents’ personal contributions to serving their country in wartime, which is so important.”