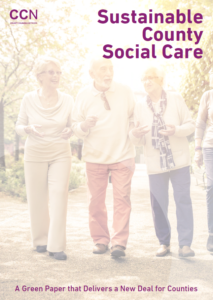 England’s largest councils have backed government plans to introduce a cap on care – but warn that it must be fully-funded otherwise it will inadvertently push services, care providers and councils closer to breaking point.

The recommendation for a fully-costed cap comes in a new report, ‘Sustainable Social Care: A Green Paper that Delivers a New Deal for Counties’, which sets out the County Councils Network’s policy positions on adult social care, ahead of the forthcoming government green paper.

The paper argues that if the government’s reform agenda is to be successful, then social care must remain a local service and ministers should ‘not be swayed’ by overly-simplistic arguments to combine all, or elements of social care into the NHS.

With counties facing a funding gap of £1.6bn in social care by 2020/21 and new figures showing the average county authority now spends 45% of its entire budget on adult social care, the report makes several key recommendations to government:

The government had been poised to introduce a £72,000 cap in 2014 before it was postponed. The 2017 Conservative Manifesto dropped its commitment to the cap, but they have since restated their commitment to the policy and it is expected to form part of forthcoming proposals.

However, the lower the cap is set, the higher the costs for county authorities – and with county authorities already facing an existing funding black hole of £949m in social care by 2020 and care home providers in these areas estimating a short-fall of £670m in the fees they receive from councils, the introduction of an un-costed cap would have ‘catastrophic’ consequences for local services; pushing services closer to the brink, fewer residents actually receiving care, and care homes potentially closing.

These councils also say that a failure to fully fund any care cap, and provide genuinely new money to meet the existing funding gap of £1bn, will further threaten the financial sustainability of England’s largest councils. A CCN survey of county leaders recently showed that only 33% of leaders were confident in delivering a balanced budget by 2020/21; with the outcome green paper pivotal to dealing with the financial uncertainty facing their councils.

The report presents evidence that shows the consequences of an unfunded cap for rural councils could be particularly acute, with counties facing an ‘unprecedented’ rise in those aged over 85 and these areas containing more ‘self-funders’ who would now, for the first time, be eligible for the cap and potentially enter state-funded care.

Population projections show that the number of over 85 households in county areas are set to balloon by 155% by 2039, rising from 491,000 to 1,254 million. This growth in rural areas represents over half of the country’s entire projected growth in over 85s, with on average 53% of social care users in counties self-funding their care.

In a CCN survey of county leaders undertaken to inform the report’s recommendations, social care cabinet members, or directors, have argued that increased national taxation should be part of the financial solution. The results found that just 6% of respondents believe that a national insurance rise would be ineffective; and just 14% believed that an increase in income tax would be ineffective. Separately, the report argues that Ministers should urgently review universal benefits to help fund social care services, such as winter fuel and attendance allowances.

County leaders also said they agree with the exploration of further proposals to make the whole system more sustainable. In recent weeks, the government has floated the idea of a social care levy, where people save into a new insurance fund that could pay for any care they need; with a final lump sum paid upon retirement.

“County areas are withstanding some of the greatest financial and demand-led pressures in delivering and procuring social care services, and have had some of the biggest cuts in core government grants since 2010. These pressures will only continue to intensify in the coming years, with counties home to the largest and fastest-growing elderly populations, and they already spend close to half their budgets on social care services.

“Faced with these current pressures, and an elderly population that is projected to increase to unprecedented levels in rural areas, financial reform for the system and protection for individuals from huge costs are necessary. That is why we are backing a cap on care cost contributions – but this must be fully-costed for local authorities, otherwise it will have catastrophic consequences as it push under-pressure social care services to the brink of collapse.

“This report today sets out policy proposals for government ahead of the social-care green paper. The status quo is no longer an option; ministers must be bold in ensuring sustainable financial reform. With care services and the NHS interdependent investing in one but not the other is financially irresponsible.

“Above all, social care must continue to stay a local service and ministers should not be swayed by overly-simplistic arguments to combine all, or elements of social care within the NHS. The challenges local government has faced in delivering balanced budgets whilst ensuring that those most in need receive high-quality care must not be underestimated – without the leadership and innovation shown at a local level, the present situation could have been a lot worse.”