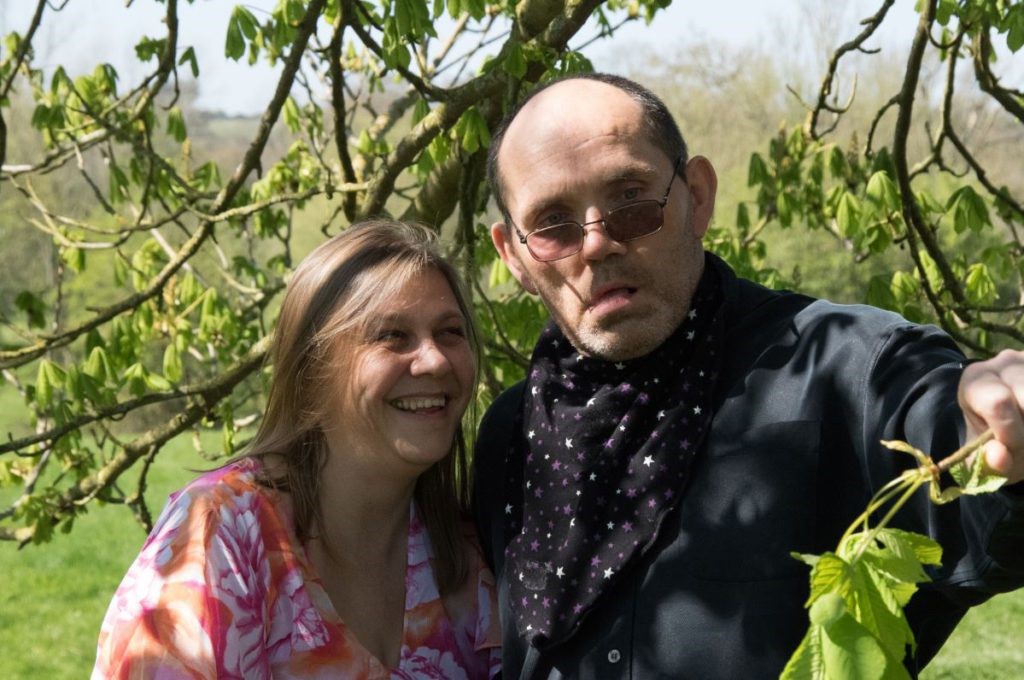 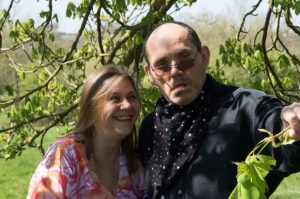 Adele Lootes, 42, is the primary carer for her partner Lance Mills, 49, who was diagnosed with behavioural variant frontotemporal dementia (FTD) in 2012, when he was just 45.

This particular form of frontotemporal dementia, which is

rare but one of the more common forms of early-onset dementia, is closely associated with behavioural changes including changes in personality and problems with speech.

Adele said the disease has left him like a nine-month-old baby, unable to speak or wash, dress or feed himself.

Lance, who worked as a steel erector before his diagnosis, now communicates to Adele with his eyes, through coughing, his body language and an Etch A Sketch he draws on.

Adele, who lives with Lance in Brailes, Warwickshire, said:

“After Lance was first diagnosed, his abilities were eroded to those of a five or six-year-old, but now he’s like a nine-month-old baby in an adult’s body.

with young kids with all the toys that are around.

“As horrendous as all this is I’m thankful that Lance has never shown any aggression like some people with FTD do and is very playful, so he likes watching CBeebies and he would use his Etch A Sketch to draw shapes to me. He still has a giggle though he’s mute.

“Lance is not quite bedbound, but I believe he would be had I not kept him at home and kept him stimulated every day. He still recognises me, which is something other people don’t expect which I think is down to an assumption that all forms of dementia are just like Alzheimer’s.

“Before all this Lance was always outgoing and loud, very cheeky, and he liked to work hard and play hard. He enjoyed fishing and computer games, walks in the outdoors, and he’d help anybody who needed it. H

e also liked a good night out, if you can imagine the guy on the old Lynx advert dancing on his own and sliding across the floor in the middle of the room – that was Lance. We met through his sister, who was one of my best friends, so we were all really close.

“It breaks my heart to know he’ll never be that person again, but I’ll be there for him always. We’ve been together for 16 years.”

Though he showed symptoms of the condition in 2010, it was not until Lance lost his interest in sea fishing and other things he was passionate about that Adele realised something was seriously wrong.

He began to smoke continuously and would walk for five hours a day, before returning home and switching lights on a

They went to Lance’s GP, but as Lance had lost both his dad and sister to cancer in a short space of time, his symptoms were put down to depression.

But when Adele received a call from Lance’s boss saying he had been putting bolts but not screws into place, causing huge health and safety risks, she went back to the GP for help.

After further cognitive tests, blood tests, a lumbar puncture, and brain scans confirming shrinkage of the front part of the brain, he was diagnosed with behavioural variant frontotempor

al dementia in May 2013. Since then Adele has needed carers to come in to help her with Lance every day, as he needs 24-hour care.

“By the point that Lance was formally diagnosed he was already in his own bubble and down to just one word. He couldn’t hold conversations. I felt so grateful to finally find out what was wrong, he had become a different person for so long that the diagnosis was a relief.

“It’s an incredibly hard time for me, and his mum whose husband and daughter have died. Lance is all she has left and I don’t know what she’ll do when he’s gone.

“We just can’t believe someone could go from being the life and soul of the party, holding intelligent conversations and with so many passions, to being like this. I’ve thought about sharing my story for a while, but I’ve finally decided to take the plunge because I’m desperate to raise awareness of this cruel disease which has taken my partner from me.”

Though the fast progression of Lance’s disease means he cannot take part in a long-term research trial, Adele says his brain will be donated to research when he dies in the hope that it would help in the fight to find a cure.

“Adele and Lance’s story tells of the unique and demanding complications that dementia brings, and we’re grateful for their honesty in helping to improve understanding. Frontotemporal dementia is thought to account for less than five percent of all dementia cases, and it usually affects people between the ages of 45 and 64, in stark contrast to the common misconception that dementia affects only the elderly.

“It is only through research into all the many complex forms of dementia that we can defeat the condition, which turns lives upside down and which no one currently survives. Alzheimer’s Research UK is committed to ending the fear, harm and heartbreak of dementia through world-class research projects, including for rarer dementias like fro

scientists’ pioneering work in the UK and beyond is only possible thanks to our dedicated supporters like Adele.”

For support for rarer forms of dementia go to www.raredementiasupport.org