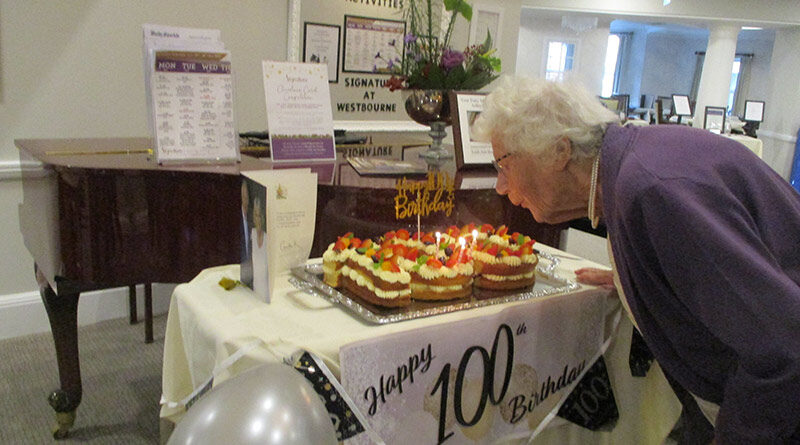 It was a momentous day as Betty Gibbs became one of the first people in Dorset to receive a letter from King Charles III as she celebrated her 100th birthday on 25th October.

The resident at Signature at Westbourne, described receiving the letter as part of her birthday celebrations as “lovely”.

To mark the incredible milestone, Betty was whisked off to her son’s house in London, where she was joined by 26 members of her family for a big celebration. The group enjoyed a wonderful afternoon of fun, laughter, and a delicious three-course meal including a homemade birthday cake made by Betty’s granddaughters. There was added joy as the celebrations also marked the first time Betty had been able to see her great-grandchildren since the start of the pandemic.
Alongside this, Betty also received a card, flowers, and a personalised mug from the team at Signature at Westbourne.

Betty was born in Chatham Barracks on account of her father being in the Royal Navy, however it was in Bromley in Kent where she spent much of the early part of her life until the outbreak of the Second World War. With her sister forced to evacuate and her two brothers joining the army, Betty sought to follow in her father’s footsteps, and chose to join the Royal Navy as a Mechanic in the Fleet Arm.

It was during this period of her life that she met her husband-to-be, Peter, who was an Officer aboard HMS Colossus. Though the duo soon got engaged, shortly after this point duty called for Peter, who had to join his crew in heading to the Pacific to support in the ongoing war effort.

Although it was years before Betty and Peter saw each other again, their hearts grew fonder, and upon Peter’s return the two immediately got married. Within a year their eldest son was born, and 20 months later a set of twins arrived.

Betty and her family lived happily in Shoreham-by-Sea for many years, with Peter working initially as an Engineer and then Nuclear Physicist.

Following their children leaving home, the duo then moved to Switzerland, where they remained for 11 years.

And while, they did return to the UK upon Peter’s retirement, their escapades were far from over, as from there they began travelling around the world.

Betty has continued to carry this sense of adventure and lust for life since arriving at Signature at Westbourne four years ago and is involved in all afternoon sporting activities at the care home, as well as her favourite classical music club in the evenings.

“Betty gets involved in everything! She is very sociable and lives the life she wants. She loves the bus trips, skittles, carpet bowls, the quizzes, and much more, but her favourite is certainly the classical musical sessions that Kim, our Activities Co-ordinator, does in the evenings… As well as the Pimms and Proms events at the home!”

Speaking about Betty and her remarkable achievement, Wendy Blow, Senior Client Liaison Manager at Signature at Westbourne, said:
When asked what advice she would give for living to such an impressive age, Betty Gibbs said: “The best thing is keeping my independence. I am very determined and focused and love doing the quizzes and activities, which keeps my mind and body active. If I can do anything for myself, I’ll do it!