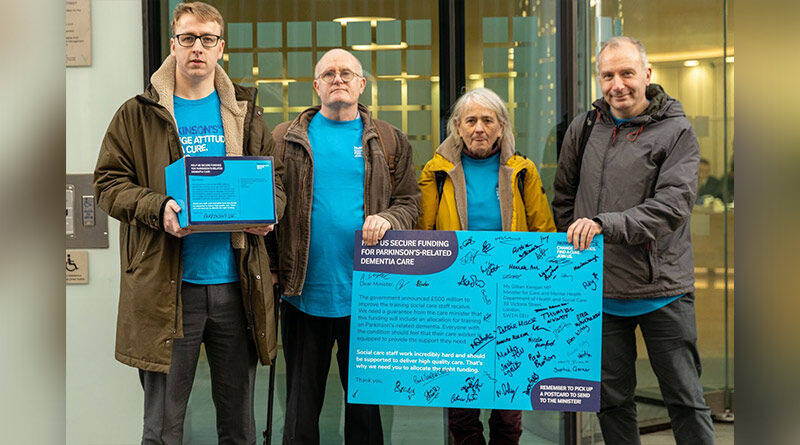 Parkinson’s UK has launched a major campaign demanding better training for social care staff, as exhausted families say the needs of their loved ones with Parkinson’s-related dementia are being neglected.

Over 1200 postcards, signed by carers of people with Parkinson’s-related dementia, have been delivered to Whitehall as part of the charity’s ‘Nobody Really Knows Us’ campaign.

The campaign is calling for the Government to allocate some of the £500 million it has pledged to upskill the social care workforce to equip workers with the right skills to help people with the condition. A 2021 study by Parkinson’s UK showed that just 14% of health professionals felt that their training had prepared them well to provide high-quality care for people with Parkinson’s-related dementia. A further 58% said their training was adequate but they needed more.

The same study showed the impact of that lack of training with just a quarter of carers of people with Parkinson’s-related dementia feeling that social care staff understood their needs, while some were given no help at all.

The postcards from family members were delivered to the Department of Health and Social Care, and the charity hopes to meet the Care Minister Helen Whately soon to discuss their demands.

Families say they are under excessive pressure to both make sense of the health and care system themselves and understand their loved one’s complex needs. They say they are also under huge pressure as the social care system doesn’t give them a break.

Over 120,000 people in England are living with Parkinson’s, which is the fastest growing neurodegenerative condition in the world.  There are over 40 symptoms associated with it, from tremor and pain to anxiety.

Around three in ten people with Parkinson’s have Parkinson’s-related dementia and it typically slows down a person’s speed of thinking and creates problems with hallucinations, understanding, planning, judgement, language and memory. They live with both movement and cognitive symptoms, unlike most other types of dementia.

Barbara Deering, 76, from Buckinghamshire, signed her postcard after years of caring for her husband Barney without any support, including when she was having chemotherapy for Lymphoma.  She says it took a major incident, when her husband fell from the top of the stairs and she had to call an ambulance, to finally get a referral for help.

She said: “My lovely husband Barney was diagnosed in his late fifties with Parkinson’s and we managed for about ten years with the help of his Parkinson’s consultant and Parkinson’s UK.

“After about ten years, his mental health deteriorated and he became physically weaker and began losing his eyesight. Not through lack of trying we fell through loopholes in the system and failed to get a proper diagnosis of dementia, long term help, advice or support.

“I became his carer 24/7 and he needed my constant attention. Medication, feeding, bathing, dressing and toileting take a lot of the day. In addition hallucinations, non cooperative behaviours and night terrors are a massive challenge when there is no advice available.

“I became totally exhausted, getting up at least 10 times a night, socially isolated and at my wits’ end. Our two children and their families tried to help wherever possible but were working full-time with children at school and didn’t live locally.

“This situation became further complicated when I became seriously ill and had an extensive course of chemotherapy. Because I couldn’t afford a carer he had to come with me. He was refused hospital transport with me so I had to pay for taxis to get there.

“When Barney went into care via Social Services, following his fall, he was placed in a home over an hour’s drive away and deteriorated so much. He was in hospital for 3 months, where I visited every single day to help feed him. It was costing me up to £200 pounds a week in petrol and parking.

“Fortunately I found him a wonderful nursing home, after visiting 22, where he spent his last years.”

Barney, who had a career in management and volunteered for Parkinson’s UK, died aged 78 of Lewy Body Dementia. The couple had been married 54 years.

Parkinson’s UK conducted interviews with people with Parkinson’s-related dementia and their carers, as well as surveys of carers and healthcare professionals to fully understand their experience of health and care services.

It revealed that training for health and care professionals on Parkinson’s-related dementia is inadequate and inconsistent and people affected by the condition feel that “nobody really knows us”.

Sam Freeman Carney, Health Policy and Improvement Lead at Parkinson’s UK, said: “Our report found the health and care needs of people with Parkinson’s-related dementia and their family and friends are being severely neglected. Unfortunately, even from the very start of their journey, the health and social care system is ill-equipped to support people with these types of dementia.

“There is a major problem with the lack of understanding of Parkinson’s-related dementia among paid carers in the home or in care homes. We also see this in health care professionals who do not specialise or have a special interest in the condition.

“This is putting incredible pressure on families, who as well as trying to navigate a complex care system, are also faced with care staff who lack training for this specific condition. Families are crying out for urgent support. We’re demanding action now.”

The charity is calling for the Department of Health and Social Care to allocate some of the £500 million they announced earlier this year, to upskill hard working social care staff on Parkinsons-related dementia, to drive up the quality of care the community receives.