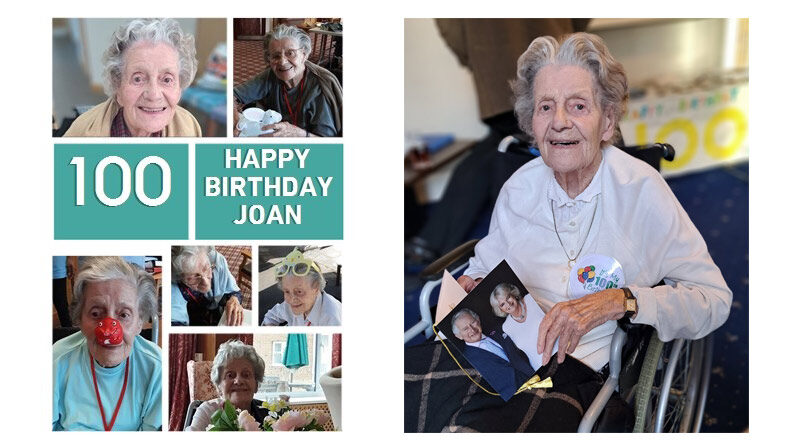 A resident at RMBI Care Co. Home Prince Philip Duke of Edinburgh Court, in Wokingham, has recently celebrated her 100th birthday. Joan Parr enjoyed a party with family and friends, including residents from the Home, who gave her a cosy warm blanket as a gift. She was also delighted to receive a birthday card from King Charles III and the Queen Consort, which arrived at the care home by special delivery.

But it wasn’t the only birthday card she opened. Joan received many, including one from her friend and fellow resident Ann Green, who is her dominoes partner. Ann introduced Joan to the game at the age of 99 and now they play together almost every afternoon. “You do not dare to interrupt mid-game as the concentration is so intense, not even for a cup of tea!” says Joan, whose dominoes games have become more and more competitive.

Joan was born on 20 November 1922. Although she was only 17 when the Second World War broke out, she worked as a truck driver in those days, which wasn’t exempt of risks. “Joan’s memories of the war captivates us all as she worked fearlessly during that time,” says Sharon Fletcher, one of the Activities Coordinators at Prince Philip Duke of Edinburgh Court. “The delightful time shared with Joan on her big day has been a privilege for everyone at the Home. Her humour and joy for life brings a smile to everyone, and she always has a kind word to say about others’ achievements and efforts.”

Joan has become an active member since she moved to Prince Philip Duke of Edinburgh Court, so much so that the staff created a birthday card that highlights some of the activities she has been part of. “Joan joins in many activities, including arts and crafts, seated yoga and flower arrangement. Also, her detailed drawing skills are amazing!” says Sharon Fletcher.