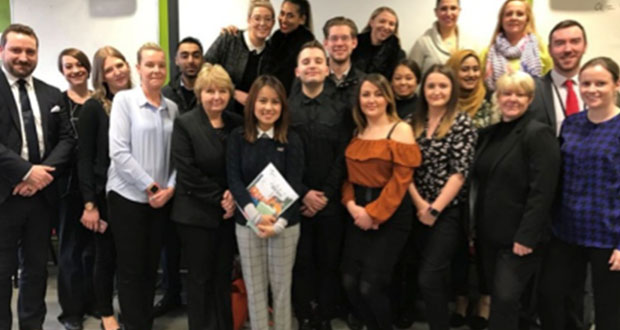 World Duty Free staff at Manchester Airport are embarking on a fierce fundraising battle to raise more money for the UK’s leading dementia research charity than their counterparts in the south.

As part of their Leadership Training Course, Craig Culshaw, 28, Jane Lovatt, 46, Susan Massey, Karla Spencer, 29, and Natasha Heathcote, 23, are being encouraged to raise £3,000 in the next six months for their company’s chosen charity partner, Alzheimer’s Research UK. To kick-start the challenge, the group joined their colleagues – now their competition – from stores at airports across the UK, on a lab tour at the University of Salford.

During the tour on March 1, they learnt about a pioneering project, funded by Alzheimer’s Research UK, which focuses on understanding why abnormal proteins are not cleared from the brain in diseases such as Alzheimer’s disease and frontotemporal dementia. Researchers at Salford are trying to pinpoint exactly where the problem lies in these complex pathways. This information can then be used to develop new treatments to restore normal function to brain cells in Alzheimer’s disease.

The trip was aimed at educating the trainees about Alzheimer’s Research UK and the research the charity is funding to help find a cure for this devastating condition. World Duty Free has been fundraising for the charity since January 2016, with the aim of donating an incredible £150,000 by the end of the partnership in 2018. So far, they have raised more than £53,000. All funds raised will be used to support the charity’s Dementia Research Infoline, which is a vital service for the public to ask questions about dementia and dementia research.

To encourage the trainees to get more involved in the fundraising efforts, they have been split into two teams – North and South – and the competition is now on to see who can raise the most for the charity. The aim is to raise £6,000 in total, with each team given a target of £3,000. They already have lots of activities planned to hit their goals, with staff at Manchester Airport planning to organise lots of events over the next few months.

Natasha Heathcote, who is planning to run a half marathon for the charity, said:

“The lab tour was really eye-opening and has helped me to understand why it is so important to raise funds for Alzheimer’s Research UK. There are so many misconceptions surrounding dementia and I’m grateful to have had the opportunity to learn more about this devastating condition, while also discovering how research can defeat it. The day has given me the drive and passion to go out and raise as much as possible for the charity – particularly as we are up against the south!”

“It was a real pleasure to take the trainees on a lab tour at the University of Salford, so we could show them the important work we are funding to defeat dementia sooner. There are currently 850,000 people in the UK living with dementia, including around 30,000 in Greater Manchester alone. Although we have just launched the fundraising challenge, both teams are incredibly enthusiastic and have some great ideas. We can’t wait to see these come to life over the next few months – and there is nothing like some friendly rivalry to build momentum!”