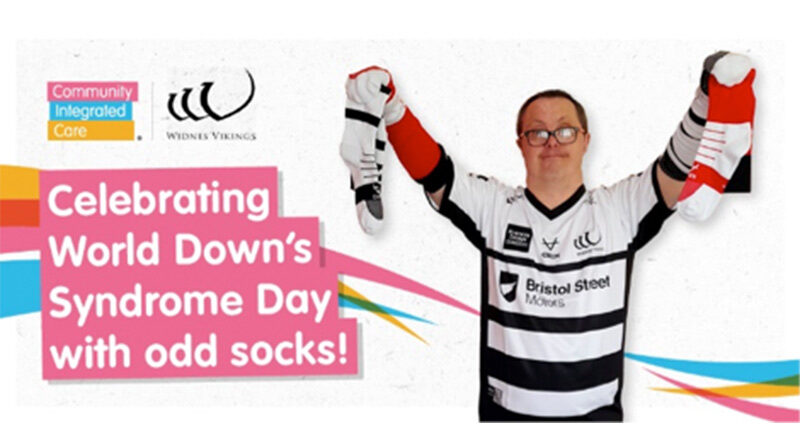 Widnes Vikings and Community Integrated Care have come together to celebrate World Down’s Syndrome Day, as the Vikings returned to action on Sunday (21stMarch).

Widnes Vikings players wore a home and away sock in their Betfred Challenge Cup tie against West Wales Raiders, supporting the ‘Odd Socks Day’ initiative that marks this important global day of awareness.

Importantly, this concept has been developed and led by people supported by Community Integrated Care in Widnes who are participating in the charity’s ground-breaking Rugby League World Cup 2021 Inclusive Volunteering Programme, which is being proudly supported by Widnes Vikings.

Ian and Patricia, who have Down’s Syndrome and have enjoyed many special experiences with their local club in recent years, have had the proud responsibility of helping to pair the socks that the first team players wore on the day and leading the campaign’s promotion. With the game broadcast live on BBC iPlayer and BBC Sport’s digital platforms, their efforts were seen by and inspired many.

Oliver Thomason, Sport Inclusion Assistant for Community Integrated Care, helped to plan the campaign. He says “I have Down’s Syndrome and this campaign is very special to me. It is so important to raise awareness of Down’s Syndrome and to show all of the amazing things that people with learning disabilities can achieve. I want to say thank you to the Widnes Vikings for helping us do this in such an important Challenge Cup game.”

Phil Finney, CEO of Widnes Vikings, says: “As a club, we are very pleased to be supporting Community Integrated Care once again to create as much awareness as we possibly can for World Down’s Syndrome day.”

John Hughes, Director of Partnerships and Communities at Community Integrated Care, says: “Widnes Vikings are making an enormously powerful gesture. For the club to support this campaign in their first game back since the pandemic, and to enable Ian and Patricia to have such a special experience, demonstrates their commitment to valuing all supporters within their community.

As a charity that was founded in Widnes, our relationship with the Vikings is very important. The club, its players and its supporters have created many unforgettable experiences for the people we support over the past five years. It has been inspirational to see this continue, with their committed backing of our Rugby League World Cup 2021 Inclusive Volunteering Programme.

I would like to thank everyone at Widnes Vikings and Oliver, Patricia, and Ian for creating this opportunity. Their work will make many people feel proud, recognised and included.”