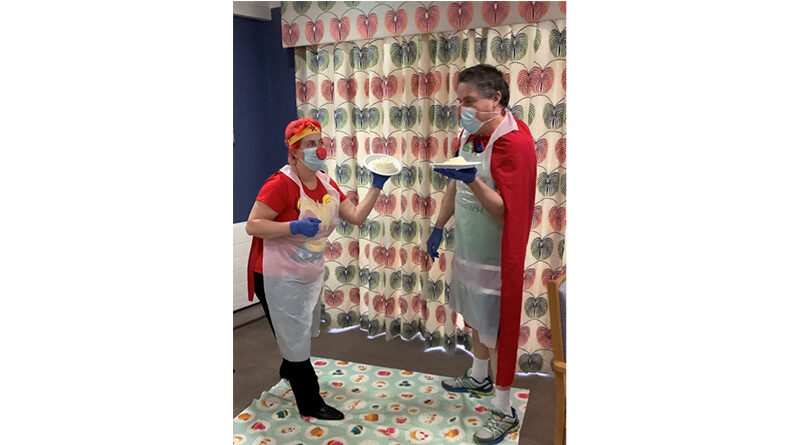 Residents and staff at Colten Care homes marked Red Nose Day with games, quizzes, dressing up and lots of laughter.

The fundraising marathon, in aid of vulnerable people in the UK and overseas, even featured a custard pie-throwing challenge.

At Avon Cliff in Bournemouth, Companionship Team colleagues Brian Knight and Sharon Surgeon consented to ‘pie’ each other in return for donations.

Dressed as superheroes for the day, they also made masks for residents and held a Red Nose Day quiz.

And residents were invited to suggest ‘silly’ music requests for the pair to attempt to sing, such as Mud, Mud, Glorious Mud and The Laughing Policemen.

Companionship colleague Rebecca Osborne posed as her own ‘Rainbow Woman’ superhero and gave out rainbow-designed cards to residents with messages of hope and positivity.

Resident Shirley Wilson said: “The Companionship Team are raving mad. They put in such a great effort to help us enjoy a day full of fun and games.”

In return, Sharon said: “We all need some laughter in our lives at the moment and this was a great way to showcase how fun things can be here at Avon Cliff.”

At Outstanding-rated Newstone House in Sturminster Newton, team members organised a ‘Red Nose Hunt’, encouraging residents to take time in the garden, enjoy the fresh air and get some exercise. The hidden ‘noses’ had a variety of jokes on them for the residents to read out when they found them.

Companionship Team Member Sam Hurst said: “This created a fun and lively atmosphere for all. Residents thanked us for the opportunity to explore new areas of the garden which they had not seen before. One of our residents said that it made her whole week as we laughed and giggled our way around the garden.”