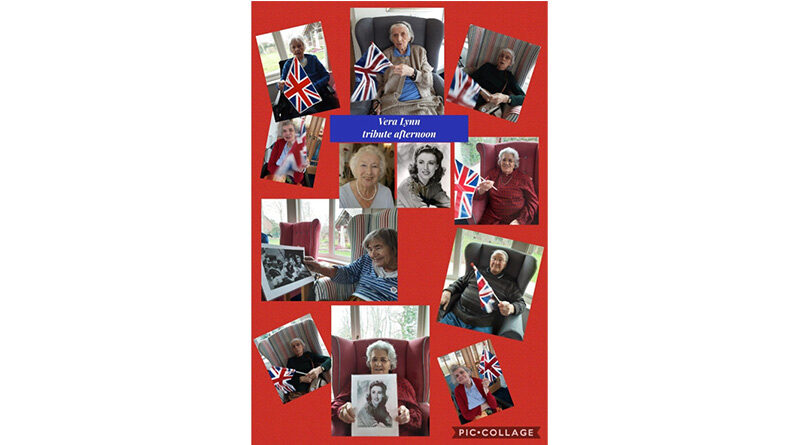 Iconic forces sweetheart Dame Vera Lynn has been fondly remembered during a tribute afternoon at a New Forest care home.

Residents at Colten Care’s Outstanding-rated Woodpeckers in Brockenhurst wanted to mark what would have been the late singer’s 104th birthday.

It was an opportunity to sing along to some of Dame Vera’s famous songs, share memories of life during and after the Second World War and wave Union Jacks.

Resident Barbara St John Frost had special reason to reminisce as she used to live in the next village to Dame Vera in East Sussex.

Barbara said: “I have fond memories of her and her husband Harry Lewis. They both used to come to all local events and festivities. They were lovely people.”

We’ll Meet Again, one of Dame Vera’s most enduring songs, featured strongly during the afternoon.

The lyrics are familiar to Woodpeckers residents as they recently performed it for sign2sing, a fundraising event run by the deaf health charity SignHealth.

They joined residents at several Colten Care homes in learning Makaton signs so they could sing and sign along in a video available to watch at www.youtube.com/coltencare.

Just before she died last year, Dame Vera sent a letter to another Outstanding-rated Colten home, Canford Chase in Poole, thanking residents for sending a card for her 103rd birthday featuring photos of them holding flowers. The card was sent just as the nation began observing the first lockdown in March 2020.

One of the lines in her letter of reply recalled a lyric from We’ll Meet Again, when she wrote: “It was very special to see your happy faces and to know that you ‘keep smiling through’”.