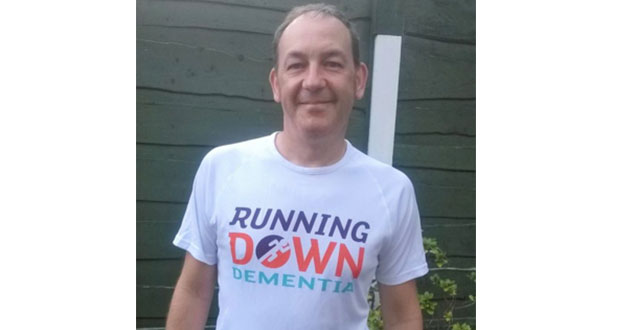 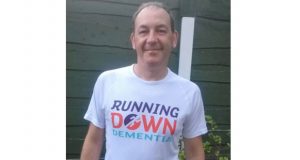 English teacher Peter Warr has been inspired to take on Alzheimer’s Research UK’s summer challenge, Running Down Dementia, after seeing his mum deteriorate from the condition.

Peter, who is a parkrunner, decided to take on the challenge for his mum Jean, 72, who is living with dementia and has gone on to raise five times the target with more than £550 in sponsorship.

“I heard about Running Down Dementia in the weekly parkrun newsletter and thought it was a great challenge to take on as it was something I could do in manageable chunks and it is for a great cause. My mum has been my inspiration.”

His mum Jean was diagnosed with dementia seven years ago and is cared for by Peter’s father Terry. Jean has gradually lost the ability to hold a conversation or follow instructions and used to visit her friends each week but now has to be taken by her husband as she can’t make her way there on her own.

Peter, who lives in Bury with his wife Fiona Lynch and their three children, added:

“She used to do everything around the house but now my dad has to do it as she’s unable to carry out housework or complete simple tasks. If you were to ask her to get something out of the fridge she wouldn’t know where it is.”

The 43-year-old has received great support from family and friends and on recently leaving his job of 16-years at All Hallows RC High School he requested donations towards his Running Down Dementia challenge, in lieu of a leaving gift, and was blown away by his colleagues’ generosity after receiving £320 in sponsorship.

Peter, who has just completed the 100km challenge, is delighted with his fundraising total of £557. Participants of the challenge pledge to raise a minimum of £100 and run 100km by the end of October when the campaign ends with many runners having completed or nearing the end of their fundraising challenge.

“Peter has a personal reason for taking on Running Down Dementia as so many of our runners do.

“By taking part in this challenge runners like Peter are making a huge contribution to dementia research which is vital to combat the diseases that cause the condition.  There are 850,000 people in the UK living with the dementia, including over 2,200 in Bury alone.

“At Alzheimer’s Research UK we fund the most promising research into preventions and treatments for dementia. We couldn’t do it without supporters like Peter.”

If you would like to sponsor Peter visit his page: https://running-down-dementia.everydayhero.com/uk/peter-3

For more information about Running Down Dementia or to sponsor a friend taking part in the challenge visit http://www.runningdowndementia.org/