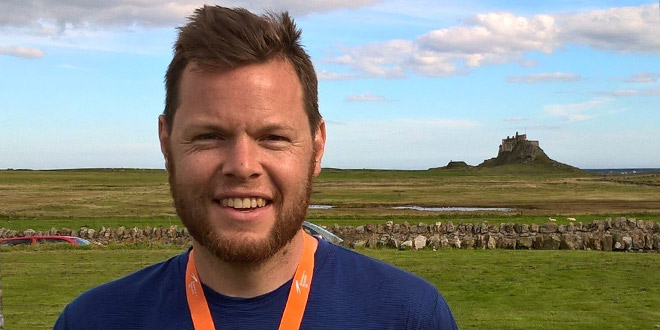 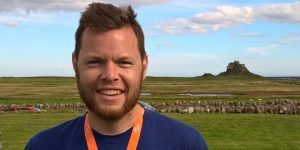 A fundraiser from Marlesford in Suffolk has completed a gruelling non-stop 100km trek to raise money for Alzheimer’s Research UK, the UK’s leading dementia research charity.

Ross Proctor, who works at AXA Insurance in Ipswich, was one of dozens of people taking part in Race the Tide, and was part of a 12-strong team from the company raising money for AXA’s chosen charity. The 30-hour endurance event, which took walkers along the spectacularly beautiful St Cuthbert’s way across the Scottish/English border, saw Ross raise over £1,300 for pioneering dementia research.

Staff from AXA Insurance have been raising money for Alzheimer’s Research UK as part of a three-year partnership that began in April 2015. Employees from the firm’s network of offices have already raised over £175,000, with the Race the Tide team helping to boost the total even further. The challenge covered a route stretching from Melrose in the Scottish Borders to the Holy Island of Lindisfarne off the Northumberland coast. Ross and his fellow walkers had 30 hours to complete the 100km challenge before the finishing point was cut off by the incoming tide, walking through the night to reach the finish line.

“When the opportunity to take part in Race the Tide came along I knew it was perfect for me, as walking is my thing. I had a fantastic time but it was incredibly hard, and there is no way you can fully prepare yourself for a challenge like this. Trying to keep going in the middle of the night was really difficult, but I just kept thinking about the reason I was doing it, and that was enough to help me carry on. I’m lucky enough that my family hasn’t been directly touched by dementia, but the number of my colleagues whose lives have been affected in some way has been a real eye-opener. Hearing other walkers talk about the impact the condition has had on their families, I could remind myself that my pain was only temporary, and nothing compared to what they are going through.

“It was a beautiful route, and when you could ignore the pain, it was really lovely being in the hills at night time. There was also great camaraderie, and we all helped to keep each other going. It turns out that one of my fellow walkers, Francesca Nicholls, was a scientist at one of the charity’s Drug Discovery Institutes, and it was great to hear about her research and see how connected she and her colleagues are to the work they’re doing. Research can make a difference, so I’m really happy to have raised so much to support Alzheimer’s Research UK’s work.”

“We couldn’t be more grateful to Ross and the AXA team for taking on this immense challenge. The money raised will be able to help provide essential equipment and resources for our scientists, bringing new treatments, preventions and a cure for dementia ever closer. With 850,000 people living with dementia in the UK including nearly 12,000 in Suffolk alone, the need for research to defeat the condition has never been more urgent. Our scientists are leading the way in the search for new treatments, but we rely on the public to be able to fund this work. It’s thanks to the support of companies like AXA that we’re able to continue our pioneering research.”