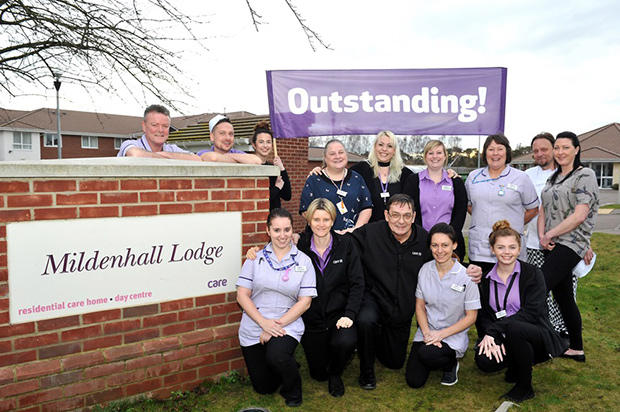 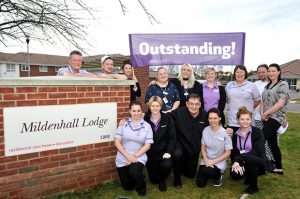 A canine relations manager, a pub and a twilight club for residents who can’t sleep are just some of the ingredients that have led to Care UK’s Mildenhall Lodge care home being rated as ‘outstanding’ by the CQC.

The ethos of the home is one focused entirely on residents, with the inspector’s report highlighting that care planning was extremely person-centred. The report noted key features which made the home an outstanding place to live, including an in-house pub and cinema, regular trips out for residents, and Sinbad, the home’s much-loved adopted dog who has been given the job title of canine relations manager.

Social inclusion was an important part of day to day life at Mildenhall Lodge. The Lark Café is situated in the main entrance hall of the home, and throughout the inspectors’ visit it was a hive of social activity and a community in its own right within the home.

Another key social space in the home was highlighted as the in-house pub, named the ‘QE2 Tavern’ by the residents. This area is set out like a real pub, complete with oak bar, pool table and bar stools. A team member commented: “Families have pub lunches here with their relatives. They just let the kitchen know what they would like. Often, it’s scampi and chips, real pub food”.

Residents were empowered to be involved in all aspects of running the home, and a ‘resident ambassador’ had been introduced. Jean Fincham was described as ‘an instrumental part of the home’, who was supported and empowered by Katy to take part in the recruitment of the team. During the visit, inspectors saw that Jean was interviewing new and perspective team members alongside the home management team.

A voting system had also been put in place, so that residents could vote on decisions in the home. A recent vote had seen residents decide to adopt a dog – which resulted in Sinbad joining the team. One resident said: “I love having Sinbad here. He reminds me of my last pet although my dog was a bit smaller and not so well behaved! When I feel well enough I sometimes accompany the team when they exercise Sinbad which I greatly enjoy”.

A team member said: “It’s astonishing how he [Sinbad] makes people light up. One resident who doesn’t like to leave their room very much will come downstairs specifically to have a cuddle with Sinbad.”

The home manager had also introduced a ‘Twilight Club’ to support residents living with dementia, who often don’t have regular sleeping patterns. The club is the chance to have a ‘cuppa’, a conversation and some meaningful activity. This is a new scheme at the home, and already a couple of residents have joined.

Life story books were highlighted as an important communication tool. The team used these books, which include the life history of residents, important memories, as well as hobbies, to engage with people and as a conversation starter.

The report noted that engaging with the local community was a key part of life at Mildenhall Lodge. The home hired a minibus which enabled residents to take trips to the seaside and other care homes nearby. In keeping with the home’s culture, residents voted on where they wished to visit.

Home manager, Katy Hughes, was recognised for demonstrating outstanding leadership and was described as accomplished, knowledgeable and highly motivated. Residents and their relatives considered the leadership of the home outstanding, and the culture excellent in meeting residents’ needs in a person-centred way.

The report said Katy was ‘clearly extremely enthusiastic about the home and care delivered’, and team members were committed to the residents that live at Mildenhall Lodge – a culture that was clearly led by the home manager. Relatives and residents told the inspectors that the home has exceptionally caring and attentive team members.

Katy said: “We strive to create a welcoming home from home feel at Mildenhall Lodge, and I’m so pleased our continued efforts have been recognised by the CQC’s inspectors. Everyone here works incredibly hard to provide residents with compassionate, person-centred care, and to be rated ‘outstanding’ shows just how committed the team is to making a positive difference to resident’s lives each and every day.

“I’m extremely proud of our team and I would like to say thank you for their hard work and dedication, which I know is also greatly appreciated by residents and their families.”