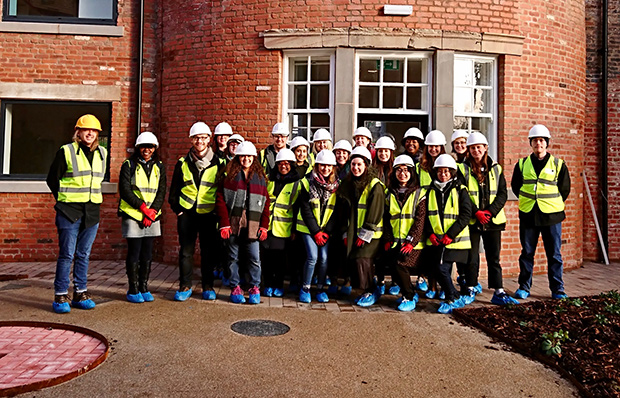 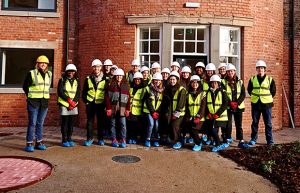 Postgraduate researchers from the University of Birmingham have hailed a major Staffordshire heritage project as a shining example of the reuse of a historical site, during a visit to Newcastle-under-Lyme’s oldest building.

The researchers, from the University of Birmingham’s Ironbridge International Institute for Cultural Heritage (IIICH), visited the 17th century building, currently being sympathetically regenerated as part of a wider £13.5m development by state-of-the-art care village operator Belong, to see first-hand the process of bringing new life to a site of historical interest. The visit also provided postgraduate students and doctoral researchers with a chance to observe the delivery phase of a Heritage Lottery Fund backed project.

A £1.8m grant from the Heritage Lottery Fund is allowing Belong to completely renovate the Grade II listed building to create The Belong Heritage Gallery. When it opens in April this year, the new facility will serve as a centre for world-leading dementia care and document the property’s history.

In the 18th century, the three-storey building on Lower Street was home to Newcastle’s only pottery, before becoming a coaching inn. It was later known as the ‘Old Pomona Inn’ and became the iconic Maxims nightclub in the 70s.

A campaign to engage the local community has been run alongside the creation of the Belong Heritage Gallery. The Maxims Live! campaign has involved a series of workshops to gather people’s memories of Maxims nightclub and the building’s more distant past. The memories are currently being turned into a play by the New Vic Theatre, which will be performed when the building reopens, and have inspired a number of features in the heritage gallery.

Jamie Davies, teaching fellow in cultural heritage at the University of Birmingham’s IIICH, said: “We are very grateful to Belong for facilitating the tour of the Belong Heritage Gallery prior to its public opening. The unique aspects of the project, including its funding streams and planned use as a centre for heritage engagement, make it a particularly interesting case study. Belong are effectively managing the challenges of heritage conservation while ensuring the building has a future role to play in the local community.”

Tracy Paine, Deputy Chief Executive of Belong, said: “We were delighted by the request from the University of Birmingham to visit the heritage gallery site. The old Maxims building has played a huge role in Newcastle’s history, so it’s a privilege to be able to preserve it for future generations. We are now looking ahead to putting the finishing touches to the gallery before it opens to the public.”