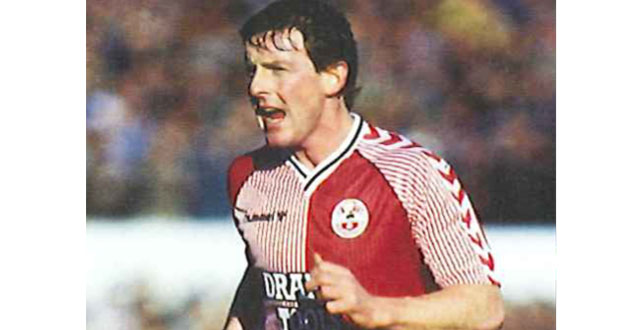 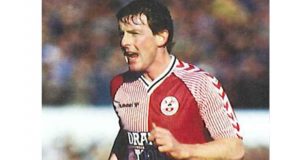 A group of friends have teamed up to raise money for Alzheimer’s Research UK in memory of Southampton footballer Kevin Moore.

Among the group is the Saints scorer’s daughter Sophie Moore, who lost her father to frontotemporal dementia in April 2013 when he was just 55.

Sophie and her old schoolmates, who have known one another since they were 12, are each running 100km over summer as part of a team in Alzheimer’s Research UK’s latest campaign Running Down Dementia, and have already raised just under £1,000.

The 30-year-old, who works in media as a business director, was left devastated when her dad was diagnosed with the condition in 2007, and saw him change rapidly with the disease.

“I’ve known my friends since we were 12, and they all knew Dad. His symptoms started in his late 40s, around 2005 when I was in my second year of university.

“He’d been made redundant from his job as a training ground manager. It felt like a very odd thing to happen as he’d been in the job years so it was very out of the blue. He would occasionally bash his car and more and more frequently when he knew he had to be somewhere he failed to be on time.

“Those were the first warning signs but when I turned 21 and he’d just been diagnosed I moved to Australia. I knew a few things would change but I was left very shocked 10 months later when he came to visit. I felt like I didn’t recognise him as my dad anymore.

“By the time I came back it was quite bad. He went to the day centre at The White House in Curdridge for a while but lived at home in Otterbourne. When his symptoms got worse he moved into the care home permanently.

“My mum Mandy, my brother and I just want to get his story out there as much as possible. He would head the ball a lot during football games and we wonder how much of an effect that had. There needs to be more research into frontotemporal dementia, it’s such a complicated disease.”

Speaking about their fundraising Sophie added:

“I’m proud to have raised as much as I have through Running Down Dementia. My friends and I got together as a team so we could support each other and do something to help dementia research.

“Our team has girls running in London, Surrey, Hampshire, Denmark and New York so we’d love to pass the £1,000 mark.”

Kevin completed a surveying degree while still playing football and stayed on at Fulham FC when he retired from playing to be the stadium manager and later on the training ground manager.

Sophie and her team named themselves the ‘Ford Girls’ because they are from Chandler’s Ford in Hampshire, and are currently in second place on the Running Down Dementia teams leaderboard.

To donate to their team’s challenge go to https://running-down-dementia.everydayhero.com/uk/ford-girls.

“We can’t thank the Ford Girls enough for raising money through Running Down Dementia.

“I’d also like to thank Sophie for sharing her story about her father.

“At the moment there are 850,000 people in the UK with dementia, including nearly 20,000 in Hampshire. Alzheimer’s Research UK is funding the most promising research into dementia. We couldn’t do it without supporters like Sophie and her team.”