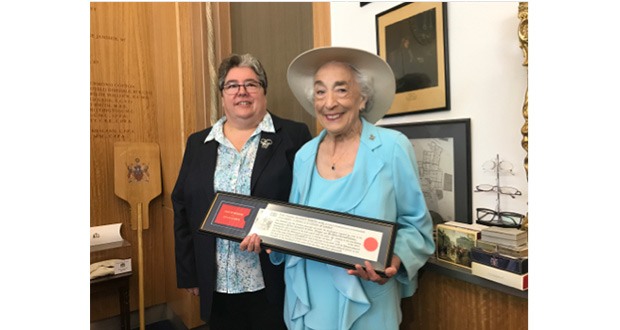 A veteran charity worker, who lives in an independent living apartment at RMBI Care Co.’s Farnfield Court, South Croydon, has been given the Freedom of the City of London.

Rita Upchurch MBE, 85, was recognised for the outstanding contribution she has made to society. Among her many achievements has been her work improving the lives of those with facial disfigurement caused by burns and medical conditions.

She attended a special ceremony at London’s Guildhall, accompanied by her daughter Sally Page and other family members and friends, where she was presented with a framed certificate – a confirmation of her being granted the Freedom of the City.

Born in 1932 in Hampstead, Rita spent her early childhood in North London, and after being evacuated during the war, the family settled in South London.

Rita has contributed through her work in education and with various well-known charities, including the British Red Cross. She developed a new camouflage make-up technique which continues to help people with different forms of disfigurement in hospitals across the UK.

Rita received an MBE in 2016 and her work has also been recognised by the London British Design Centre, where she won a medical award for creating a make-up range providing coverage for scars.

In 2002, Rita founded the AZOOR Society, a charity which funds research into a rare genetic eye disease called Azoor, a condition which can lead to total blindness. Her daughter had developed the disease and no research was being carried out at the time, so Rita decided to set up her own charity, of which she is now Chairperson.

Asked how she felt about receiving the Freedom of the City of London, Rita said: I am a Londoner by birth, and have lived here all my life. My work has taken me all over the world, but coming home to this great city has always been an uplifting experience. The great honour in having this award has confirmed that this is where I truly belong.”

Rita was nominated for the Freedom of the City of London by fellow Freemasons, William Browning and Michael Cawston.

Among those congratulating Rita, was Marc Nelson-Smith, Property Director for RMBI Care Co., who said: “I can’t think of anyone more deserving than Rita to be given this amazing honour. She has done so much to help so many people in her lifetime, she really is an inspiration to us all.”