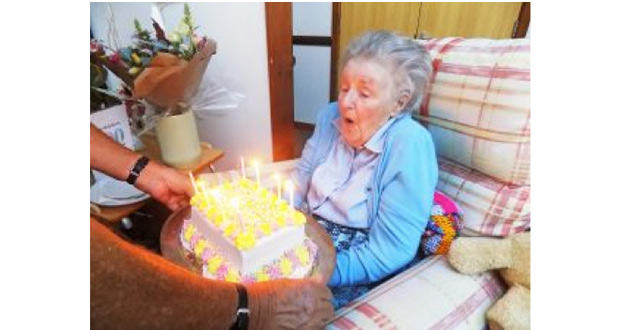 A Dorset woman who met the love of her life while serving in the RAF during the Second World War has celebrated her 100th birthday surrounded by her friends and family.

Maiden Castle House care home, in Dorchester, celebrated centenarian Audrey Rockingham’s milestone with a tea party where she was spoilt with flowers and presents, and even a card from the Queen.

Audrey spent the day with other residents, as well as her son and daughter-in-law at the Care South home, who arranged party games, music and a buffet. Staff and residents then gathered to sing happy birthday and watch Audrey make a wish while blowing out the candles on her 100th birthday cake.

Audrey is the youngest of three daughters who grew up in Southampton. Her father was in the Royal Navy and survived the battle of Jutland, before being awarded a number of medals for his bravery.

Audrey had hoped to become a teacher, but had to look after her parents during her teenage years due to them both being profoundly deaf and also cared for one of her sister’s children.

Despite that, Audrey earned a scholarship to secretarial college that led to a job in the Royal Air Force (RAF) as a Stenographer. While serving in the RAF, Audrey met the love of her life and future husband Flight Lieutenant David William Rockingham. The couple married in 1944 before moving to Portsmouth.

After leaving the RAF, Audrey became a bookkeeper and secretary, while her husband moved into insurance.