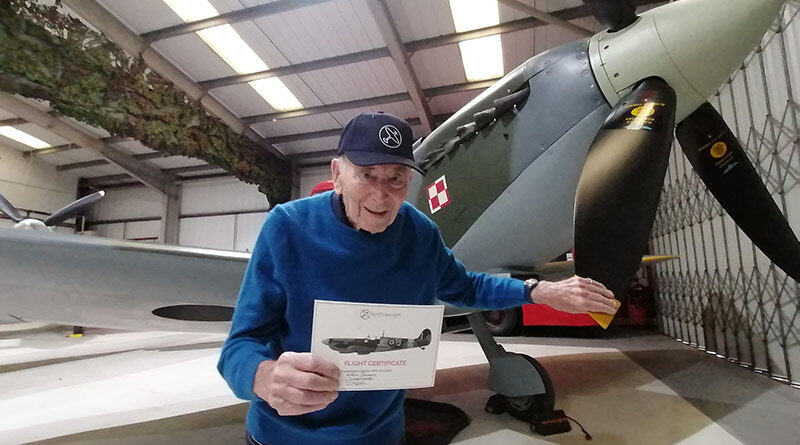 A 92-year-old Chichester care home resident fulfilled a long-held wish to reach for the sky once again after carers enabled him to take the controls of a flight simulator. 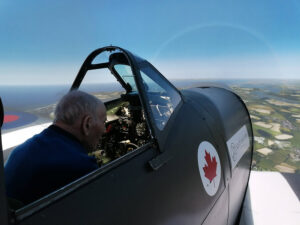 Former army officer Robin Bowley ‘flew’ an MK392 Spitfire from Goodwood Aerodrome down over Chichester harbour, across to Selsey and on to Southampton before turning back to base.

“It was an amazing experience,” he said. “Although it was all digital and we didn’t actually leave the ground, the take-off, the flight itself and the landing were all so realistic. The cockpit was indistinguishable from the real thing. It was a really unusual thing to do, I’m only just coming back down to earth now.”

Flo Dudley-Barritt, Companionship Team member at Wellington Grange, accompanied Robin to the aerodrome along with his daughters Penny Rowden and Sally Fitzmaurice.

They watched as simulator instructor Nigel Coverwell talked Robin through what the flight would entail, where he would be flying to and what procedures he needed to follow in the air.

Flo said: “This took around 20 minutes after which Nigel said: ‘Do you think you’re ready then, Robin?’ to which Robin replied: ‘Why yes, of course I am’.” 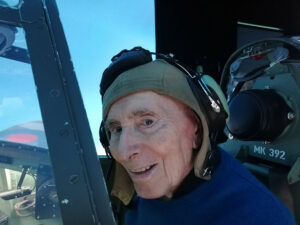 The party then made sure Robin was totally comfortable in the cockpit and had his flight gloves and cap safely on.

Nigel started the simulation and then passed over full control to Robin, with conversations between the two done from then on through earpieces.

Flo said: “Robin headed past Chichester harbour and round to Selsey before attempting his first victory roll, which he got absolutely spot on. You could tell he had really listened to what Nigel had told him in the briefing and flew the plane impeccably, clearly enjoying the experience. He was a natural in the pilot’s seat. He succeeded in doing another victory roll as they approached Southampton before eventually turning back. The simulation seemed so real and the fuselage of the plane would move when Robin ascended and descended. This all added to the ambience and authenticity he felt during the flight.”

Flo added: “In his younger days, Robin had tried to become a pilot in the RAF like his father but despite going through all the vigorous training, he wasn’t allowed to progress due to being born deaf in one ear and he eventually went on to join the army. Robin did have a few lessons in light aircraft at Goodwood and so developed a real taste for flying. We knew he would love this opportunity on the simulator. On the day he concentrated so well and was completely focused on the task in hand. He and his daughters were thrilled. We could all feel the adrenaline.”

To round off the visit, the aerodrome’s head of sales Matt Ponsford gave Robin and his daughters a tour of the Spitfire hangar. This enabled Robin to get up close with the five Spitfires kept there and hear detailed accounts of where they had come from, how old they were and who had flown in them.