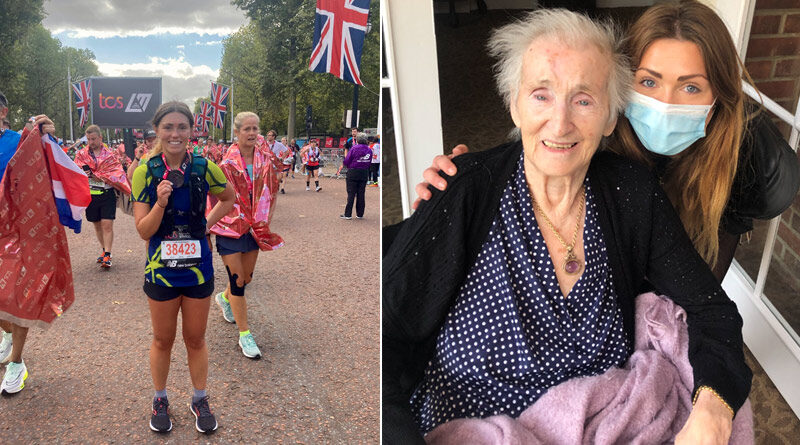 Paramedic Charley Blow has broken a sweat at the London Marathon to raise funds for Alzheimer’s Research UK on behalf of her local care home Signature at Westbourne.

Completing the gruelling 26.2 mile run around the capital in four hours and 52 mins, Charley’s fundraising campaign has already got off to a running start. Combined with cash donations, she has raised more than £1,800 so far.

Her race is far from over as she aims to raise at least £2,000 to support Alzheimer’s Research UK’s work and to show solidarity with the residents and carers at Westbourne, who along with all 35 other Signature care homes have penned a partnership with the charity.

Charley has a longstanding relationship with Signature at Westbourne, having worked there as a housekeeper at the age of 16, and later as a carer whilst studying to become a paramedic. She still applies the dementia training that she received at Signature when supporting those living with the condition in the wider community.

Although she is a novice runner, she quickly seized the challenge of completing a marathon as an opportunity to showcase the work of both Alzheimer’s Society and Signature.

This fundraising initiative is not the first time that Charley has worked with Signature to make advancements in Alzheimer’s care. In 2012, she established Westbourne’s memory café with the support of the Alzheimer’s Society to highlight the importance of providing a safe and supportive environment for those suffering with Dementia.

Reflecting on her marathon run, Charley Blow said:
“The marathon is an experience that will stay with me forever, from being a complete novice, I can proudly say I have run the full marathon for a very worthy cause.

“Watching my Nan and other residents thrive at Signature at Westbourne is testament to the fact that with the right support, anything is possible following a dementia diagnosis.

“From taking her on skiing trips to enjoying the delights of sunny Bournemouth, the supportive staff have worked wonders in helping her to regain both her confidence and her independence at 83 years young.

“Dementia will affect everyone, either directly or through a loved one, and the Alzheimer’s Research UK work to combat this is an outstanding, worthwhile cause.”

Commenting on Charley’s fundraising drive, Doina Tampu-Ababei, General Manager at Signature at Westbourne, said:
“Here at Signature of Westbourne, we are so proud of Charley’s fundraising work, as well as the work that she continues to do with older people in our community. Whilst our residents benefit from an exceptional living environment and activities programme, we are very aware that others throughout the country struggle with their dementia diagnosis.

“By fundraising for Alzheimer’s Research UK, we hope to support others with the condition and to ensure that dementia residents live as independently as possible, for as long as possible.”