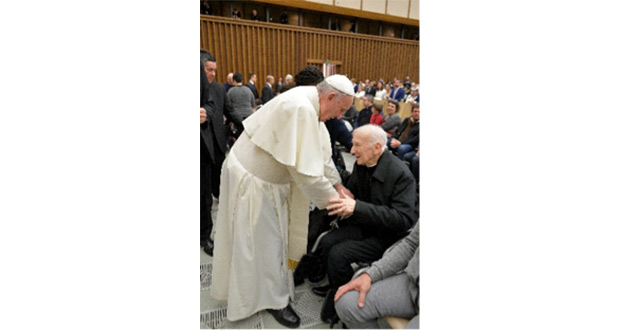 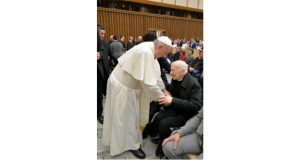 When care home manager Saad Baig decided to introduce a wishing tree into the reception of his home in Middlesex, no-one imagined it would result in one resident travelling to the Vatican for a meeting with the Pope or another taking to the wheel of a car for the first time in her life.

Father George has been a Roman Catholic priest and a teacher for the past 50 years. After developing dementia, he moved to live at Care UK’s Whitby Dene care home which Saad Baig was managing. Saad and his team worked hard to understand the Catholic faith and rituals to help Father George settle into his new home. Saad even went along to services at the local church to learn more about the role of a priest and made arrangements for Father George to continue to be able to deliver blessings to other Catholic residents at the home.

Saad soon realised that Father George had been to the Vatican several times and had met other Popes and that he was sad that he had never met Pope Francis.

Together they added a wish to the Whitby Dene’s wishing tree for Father George to receive a blessing from Pope Francis and Saad and his team started to work out how to make this dream became a reality.

Saad, got in touch with the Cardinal of England and explained the background to the Priest’s wish. He also helped Father George to write a letter to the Cardinal requesting a blessing from the Pope.

After several weeks, phone calls and a medical with Father George’s GP to ensure he was fit to travel, the news came through that the Vatican had granted Father George’s wish for an audience with Pope Francis and two tickets for the VIP area of a general audience were sent.

Father George, Saad and two other members of the Whitby Dene team, Salima Tanimu Boateng and Eileen Coyle-Jones travelled to the Vatican for two days, where they attended the Papal Audience, and afterwards Father George had the rare opportunity to meet Pope Francis and receive a blessing from him.

Father George, who is living with dementia, often struggles with his day-to-day memory, however when he arrived in Rome and saw the view from his hotel room, he knew exactly where he was and even explained to the care home team about the significance of the statues and the different robes worn by those at the Vatican.

Whitby Dene home manager, Saad Baig, said: “Residents are at the heart of everything we do here at Care UK, and our wishing tree is a fantastic way to understand what’s really important to residents – and help them to make their dreams come true. This was no ordinary wish, but we were determined to take on the challenge and are thrilled we could make this a reality for Father George.

“It was an honour to travel to the Vatican with Father George and to meet with the Pope. Father George has fond memories of Rome so it was a great place for him to reminisce, which is so important for people living with dementia. It was incredible to see him light up, he was thrilled to meet the Pope. It was a wonderful experience for everyone involved and I am so pleased we were able to make Father George’s wish come true.”