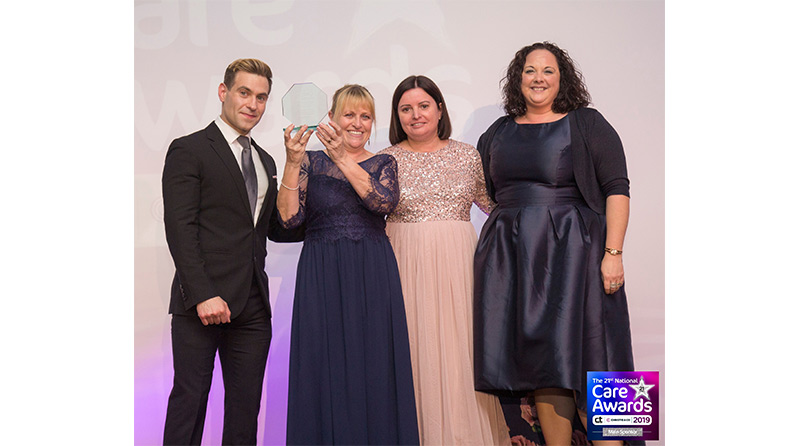 Olive House care home in Newton Flotman, Norfolk, is celebrating after the amazing work of a resident’s relative has been acknowledged at the National Care Awards 2019. Gill Howard, whose husband Dick is a resident at the home, won the Care Champion award, recognising her for the positive contribution she makes to the lives of residents, relatives and staff at the home.

Gill has been part of the home for many years, through her career as a Headteacher.  Gill was head of Newton Flotman Primary School, and for many years, she would bring the children to perform Christmas pantomimes and carols for the home’s residents.  Sadly her husband became unwell with Parkinson’s and dementia and became his carer, before he moved into Olive House.

Gill sees Olive House as Dick’s home and therefore as an extension of hers, and naturally wants to help in everything they do.  She attends every residents and relatives meeting to put forward ideas and suggestions on behalf of all involved and goes out of her way to help staff and to be a caring influence on other residents.

George Catanescu, Regional Director for Olive House, said: “We nominated Gill for the National Care Awards as we felt she should be recognised for the amazing support she provides everyone at Olive House. You don’t come across many people like Gill and when you do, you should appreciate and recognise them for the huge impact they have.

“Everyone here knows Gill and speaks to her in the same way that they would a friend, a relative or a trusted member of staff.  We value her opinion and we look forward to her visits as she always such a positive effect on everyone she’s with.

“She has contributed so much to Olive House and gives so generously with her time. When we thank her or talk to her about how grateful we are, she claims she is only looking after her husband.  This couldn’t be further from the truth.  She is caring for him with a dedication I have never seen before, whilst also supporting everything we do in our home.  We are all absolutely delighted that Gill has received the Care Champion award at the National Care Awards in recognition for her selfless efforts.”