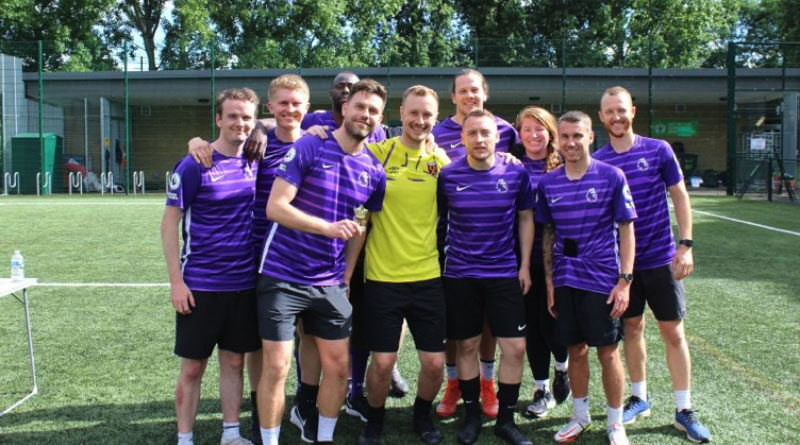 The tournament was arranged as part of Alzheimer’s Society’s partnership with The FA, where for the next two seasons, the two organisations are working together to support players and fans affected by dementia.

The six-a-side event was won by the Premier League with second place handed out to the Football Foundation.

Teams came together to raise funds to help support those affected by dementia.

Entrants donated to the charity to play on the day and a raffle with prizes including a signed Marcus Rashford print and signed England shirt, meant the day raised a total of £1180 for Alzheimer’s Society.

Aside from the main event, players also had the chance to trial walking football, a format of the game which is proving popular for many with dementia. The slower pace and reduced physical contact makes the game more accessible to those who want to continue playing or haven’t played a lot in the past.

The FA’s Director of Football Development, James Kendall, said:
“The FA are proud to have hosted this charity tournament for the first time, supporting our charity partner, Alzheimer’s Society.”

It was a great opportunity to bring our football partners together for the first time since the pandemic and to raise vital awareness and funds for such an important cause.
Matt Hughes-Short, Strategic Change Programme Manager for Sports United Against Dementia at Alzheimer’s Society, said:

Earlier this year, the England Men’s Senior team played in an International against Switzerland, which saw the squad return to the pitch after half time with the names missing from their shirts, driving home the idea that football should be unforgettable.