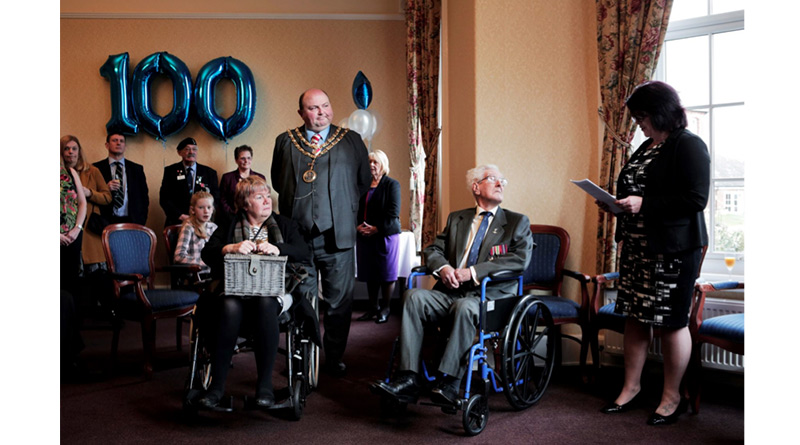 Jack served as a Captain with the Royal Corps of Signals, which also celebrates a centenary in 2020, and a commander of the regiment paid tribute to his wartime service at a surprise birthday party for Jack organised by his family.

Speaking at the event Captain Wolstenhome said: “I don’t feel a day over 70.  Everything has been marvellous and a lot of old friends have come.”

Having joined the Royal Corps of Signal at the age of 22 in 1942, he was posted to Algiers for a secondment with the Special Operations Executive, the underground army set up by Winston Churchill to wage a secret war in enemy-occupied Europe and Asia.

Throughout World War Two Jack served in various countries in Special Forces, such as Massingham, west of Algiers and across Italy in Fasano, Monopoli and Siena.  Towards the end of the war he served in Colombo and New Delhi as a staff captain prior to demobilisation in 1946.

For the decade from 1978 until his retirement, Jack used his agricultural expertise to work on a number of consultancy contracts including two years in Peru, on a project where no English was spoken, Malawai, South Yemen, Iringa and West Dodoma.

He also rekindled his appetite for Tanganyika in East Africa, which he says is his “favorite place to see the views of Meru and Kilimanjaro and drink the best coffee”.

Retirement did not stop Jack travelling. He and his wife Wendy settled in Stockton from where they headed to destinations nearer to home including Scarborough, Cornwall, Scotland, the Channel Islands and Tenerife.

In 2015, at the age of 95, Jack decided to move into Middleton Hall where his adventurous spirit remains intact; in 2019 he undertook the challenge of swimming 99 lengths of the retirement village’s Spa swimming pool in his 99th year.

Michael Hodgson, Middleton Hall’s Healthy Living Manager said: “It’s an honour to host these birthday celebrations for Jack, who is well loved and highly regarded by everyone at Middleton Hall.

“Since moving here he has retained his independence and impressive zeal for life and is an inspiration to everyone who has the pleasure of knowing him.”