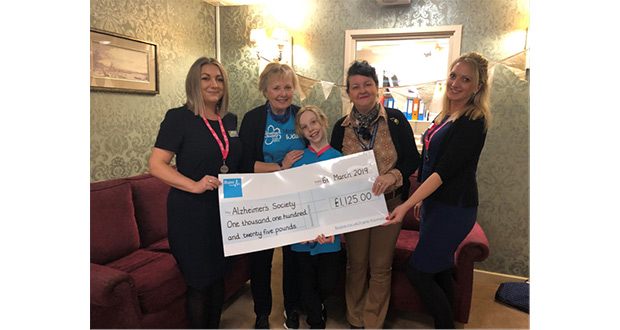 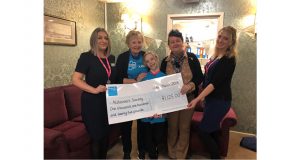 A care home has praised the “dedicated” efforts of one of its workers to smash the target of raising over a thousand pounds for the Alzheimer’s Society.

Staff from The Links Bupa Care Home in Broadstone, joined Wendy Paterson, daughter of a resident, in completing the 2018 Bournemouth Memory Walk – the first of its kind in Bournemouth. Wendy and her daughter, Ellie, raised a staggering £635 on behalf of resident Brenda and in memory of Brenda’s late husband, Albert.

The sun came out as Wendy, Ellie and staff walked along Bournemouth beach, and Bupa donated a further £225 to match the money raised by staff, bringing the total raised to £1,125.

Following the memory walk, staff and residents invited Diane Perry from the Alzheimer’s Society to the care home for a special coffee morning, followed by a cheque presentation.

Sarah Tolley, Resident Experience Manager at The Links, said, “The fundraising done by Wendy and her daughter is simply marvellous. We are all very pleased with how much money they’ve raised for a great cause. I’m sure that Wendy’s parents would be extremely touched by the gesture.

“We do our best to stay involved with the wider community and charitable causes, such as the Alzheimer’s Society, are close to our heart, here.”

Diane Perry, who received the cheque on behalf of Alzheimer’s Society said, “It’s simply wonderful to receive the cheque from The Links. It means a great deal to us at the Society.”

Bupa The Links was recently rated “Outstanding” in the latest CQC report, and specialises in caring for people living with Dementia.