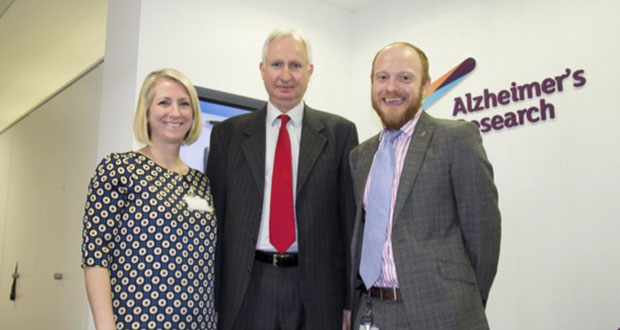 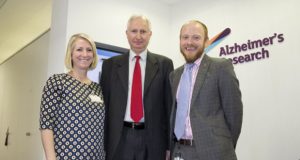 Protecting the future of dementia research in a post-Brexit Britain was on the agenda when Cambridge MP Daniel Zeichner visited Alzheimer’s Research UK.

On Thursday, Mr Zeichner visited the charity to discuss the impact leaving the EU will have on life sciences in the area and potential ways to safeguard research.

This comes less than 18 months after the MP, who is Vice Chair of a cross party group of MPs championing life sciences in the UK, went on a tour of the pioneering Alzheimer’s Research UK Stem Cell Research Centre in Cambridge. During the visit, he witnessed the key role the innovative facility is playing in the fight against dementia.

In the months that have followed, the future of dementia research in the UK has been thrown into uncertainty due to the result of the EU referendum in 2016. Last year a survey of dementia scientists, conducted by Alzheimer’s Research UK after the vote, revealed a range of concerns including a potential loss of funding, a drop in the UK’s standing as an international leader in research, and the impact on scientists’ ability to move between labs and collaborate.

Mr Zeichner has already raised questions in Parliament about the impact Brexit could have on biomedical research. During his visit to the Great Abington-based charity, representatives from the charity discussed these concerns with him, as well as ways they can work together to overcome these challenges and ensure Cambridge remains as a global hub of life sciences.

The MP was also updated on the work Alzheimer’s Research UK has been funding in Cambridge, particularly through its Drug Discovery Institute, which works to fast-track the development of new treatments for dementia and the Stem Cell Research Centre, where scientists are using state-of-the-art techniques to study how Alzheimer’s develops. He also learned more about the Dementia Research Infoline, which is a vital service for the public to ask questions about dementia and dementia research.

“It has been inspiring to see how far the charity has come since my visit to the Alzheimer’s Research UK Stem Cell Research Centre in 2015. But we cannot ignore the enormous challenge ahead of us to defeat dementia and it is fundamental that this is not delayed because of Brexit. Cambridge has long been at the forefront of scientific research and it is vital that it remains this way, particularly for charities like Alzheimer’s Research UK. I’m pleased to have had the chance to hear more about the current landscape and what we can do together to protect dementia research.”

“As a biomedical research charity working globally, we are very aware of some of the challenges Brexit may present for the important work we are doing to find a cure for dementia – our greatest medical challenge. To be able to achieve our vision of a world free from the fear, harm and heartbreak of dementia, we must ensure that the Government prioritises life sciences during its negotiations to leave the EU. We are delighted that Mr Zeichner was able to meet with us, so we could highlight some of these challenges for the future and find ways to work together to ensure Cambridge remains at the heart of life sciences in the UK.”