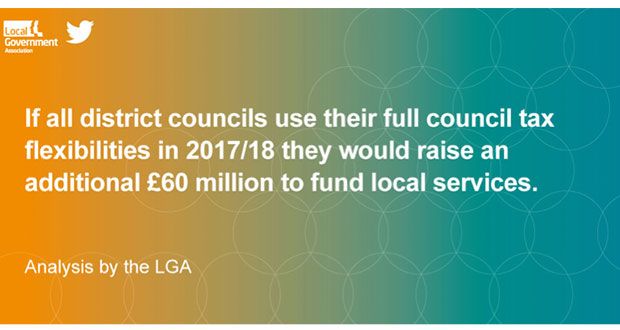 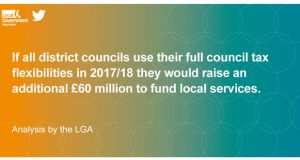 Council tax rises in 2017/18 will not bring in enough money to prevent the need for further deep cuts to local services next year, the Local Government Association warns today.

All councils can raise council tax by up to 1.99 per cent in 2017/18 to fund local services without the need for a referendum – most district councils can increase by £5 per year at Band D level.

England’s 151 social care authorities can increase council tax by up to a further 3 per cent in 2017/18 (up to 4.99 per cent in total). Income from this extra precept must be spent on social care.

With town halls across the country preparing to set their final budgets and council tax levels over the next few weeks, analysis by the LGA reveals:

With local government facing an overall funding gap of £5.8 billion by 2020, council leaders warn council tax rises will not prevent the need for continued cutbacks to local services, including social care.

Councils will also have to continue to divert more money from other local services, including filling potholes, maintaining parks and green spaces and running children’s centres, leisure centres and libraries, to try and plug growing social care funding gaps.

The LGA is calling on government to use the final Local Government Finance Settlement this month to provide new money for social care.

Unexpected New Homes Bonus reductions also need to be reversed to protect hundreds of councils having to find millions more in savings than expected to plug funding gaps in 2017/18. This will also avoid money designed to incentivise new homes from being taken away from councils at a time when the Government has made boosting housebuilding a clear priority.

“Services supporting the most vulnerable people in our communities are at breaking point and many councils are increasingly unable to turn down the chance to raise desperately-needed money for social care and other local services next year.

“But extra council tax income will not bring in anywhere near enough money to alleviate the growing pressure on social care both now and in the future and the social care precept raises different amounts of money in different parts of the country.

“Social care faces a funding gap of at least £2.6 billion by 2020. It cannot be left to council taxpayers alone to try and fix this crisis.

“Without genuinely new additional government funding for social care, vulnerable people face an ever uncertain future where they might no longer receive the dignified care and support they deserve. This is not only worse for our loved ones but will also heap further pressure and wasted expense on the NHS.

“All councils are being pushed perilously close to the financial edge after years of funding reductions. Two thirds will be forced to find millions of pounds more in savings than they were expecting next year following cuts to the New Homes Bonus.