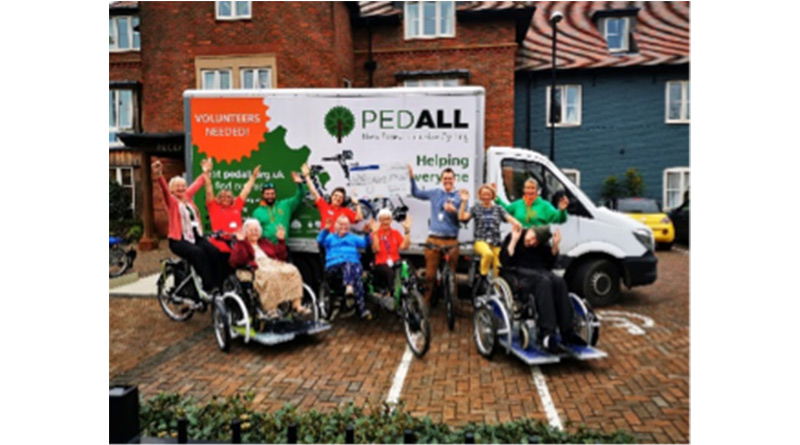 A wellbeing charity that enables people with a disability or additional need to go out and cycle in the New Forest has received a funding boost thanks to care home staff.

Volunteers at PEDALL have thanked team members at Colten Care for raising nearly £1,800 to help with their costs.

Much of the money was raised on a sponsored bike ride staged as a thank-you for the enjoyment residents experienced on outings last summer.

A carers’ survey showed improved moods and feelings of confidence in four out of five residents taking part in the rides. Around half were seen to have increased their levels of communication and socialising.

One lady, Betty Winter, said: “It was great fun, a splendid idea. I enjoyed going out on the bikes so much. It was absolutely great. We had lovely days.”

The partnership blossomed with some of the charity’s volunteers joining residents and staff as Colten Care led the environment-themed Lymington Carnival with a carbon-neutral float.

In the autumn, nine Colten Care staff got on their own bikes for a 50-mile fundraising ride visiting each of the providers’ homes in Salisbury, Brockenhurst, Lymington, New Milton and Mudeford, raising £600 for the charity along the way.

Ben Benson-Breen, Senior Companionship Team Leader for Colten Care in the New Forest, said: “Thanks to PEDALL, our residents were able to go off-road and enjoy the natural beauty of the Forest in comfort and safety. These excursions proved hugely popular with many residents returning for more outings. Some said they hadn’t been on a bike in years and never thought they would have the opportunity to do so again. We were only too pleased to raise some money for the charity in return. We can’t thank them enough.”

Links between Colten Care and the charity are set to continue with more rides for residents planned in the summer.

Homes will also keep fundraising while PEDALL Project Manager Donna Neseyif will be visiting the Kingfishers care home in New Milton to give a talk about the wider work the charity does.

Donna said: “It has been such a joy working with Colten Care and seeing the difference that rides on our specially adapted bikes can make to residents. We thank everyone who has been involved in fundraising for us and we look forward to welcoming the Colten residents back out again soon. We offer rides all year round to people age 8 to 108 who would not normally be able to get out and cycle, so helping to improve physical and mental health and reduce social isolation. We are currently funded by the National Lottery Community Fund and supported by New Forest National Park Authority. Our bikes offer different seating and driving positions with most having three or four wheels for extra stability. The types include rear-seat and side-by-side tandems, wheelchair cycles and go-karts. With funding due to end in August 2020, donations make a real difference. For more information, visit www.pedall.org.uk.”