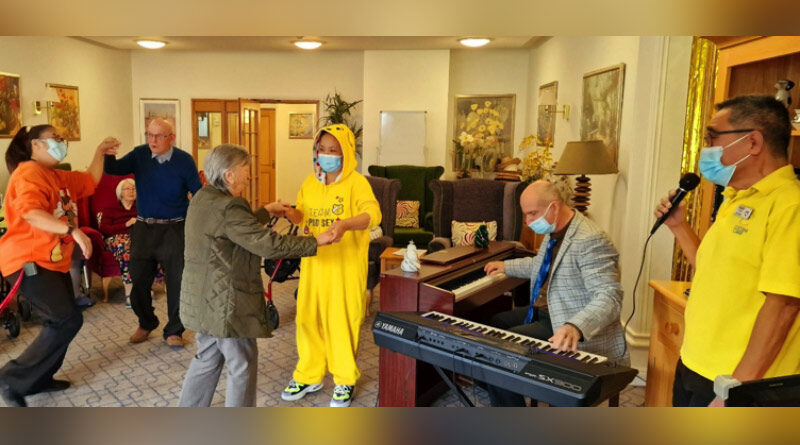 Residents and team members at Colten Care homes have done their bit for Children in Need by raising more than £400.

The total was totted up from various events held during and since the BBC’s annual fundraising appeal.

At Kingfishers in New Milton, Hampshire, residents had fun at a singalong with visiting pianist Mark Busell who played tunes from the 40s, 50s and 60s.
Resident Terry Darrell said: “Everyone had a great time. We had many people really engaged with it. There was a lot of foot tapping and dancing. It felt like New Year’s Eve.”

As well as the live music, Kingfishers held a cake sale at reception while staff wore Pudsey-style T-shirts and onesies.

Court Lodge in Lymington celebrated Children in Need with an afternoon tea and raffle featuring prizes such as hairdos, freshly baked cakes and chocolates.

The fun at Avon Cliff in Bournemouth included a duvet and pamper morning while at Bourne View in Poole there was bingo and a cheese and wine party.

At Fernhill in Longham, Dorset, staff and residents held a pyjama day and an afternoon of baking cupcakes to sell.

At St Catherines View in Winchester, residents decorated cupcakes for children at the nearby school and enjoyed a visit by balloon artist Chris Kimber who made some very clever balloon creations in front of their eyes.

The home’s Customer Advisor Vanessa Hall did her bit for Children in Need by walking ten miles to work specially in aid of the appeal.

“We greeted her with a banner we had made the day before,” said Companionship Team Leader Laura Sheldrake. “Welcoming Vanessa, getting involved with the cupcakes and watching the balloon artistry of Chris gave everyone a great opportunity to come together and have fun while supporting such a worthy cause.”