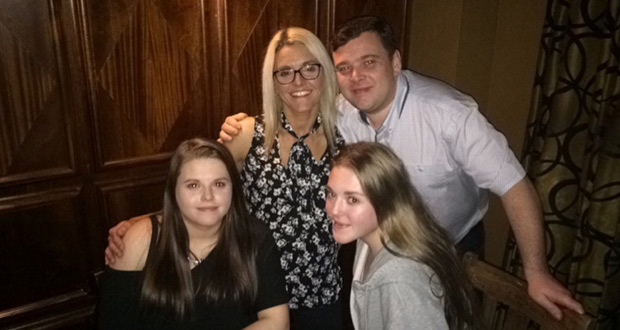 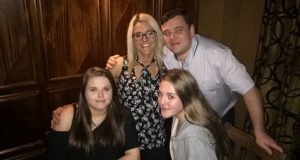 A team of Alzheimer’s Research UK runners are determined to paint the Great North Run yellow this weekend in honour of their friend and fellow runner Deborah Hutchinson who lost her daughter and partner in the terrorist attack in May.

Gateshead mum Deborah, whose 19-year-old daughter Courtney Boyle and partner Philip Tron were victims of the Manchester bombings, fell in love with running last year and had a place in the Great North Run.

Deborah with her partner Philip Tron and daughters Courtney and Nicole

However, following the attacks Deborah decided not to take part in the race this year and so her friends and fellow Alzheimer’s Research UK runners will be running in her honour on the day while wearing yellow ribbons in memory of Courtney, whose favourite colour was yellow, and her partner Philip.

The 44-year-old, who lives in Gateshead with her youngest daughter, said:

“I was so proud to pick her degree. She was my little rock and was always smiling she had a huge heart filled with love.

“Courtney never gave up. She followed her dreams – she got her A levels and got into Leeds and she was focussed on making a better life for herself.”

Deborah took up running last summer as a way of clearing her head and keeping fit.

“I felt like when I ran it cleared my head and over time I gradually got fitter. I signed up to the charity’s running challenge, Running Down Dementia (RDD), in 2016 as I work with people affected by dementia.

“As well as raising money for research, I clocked up the kilometres and made loads of new online running friends through the RDD Facebook group. In fact, I finished the challenge with fellow runners Richard Judd and Katie Carnie in Durham and it just felt great. Philip was also a huge support throughout the challenge and was waiting for me at the finish line in Durham.”

As her love for running grew Deborah recalls how she gained a new nickname at home.

“Courtney used to call me Forrest Gump. We just used to laugh about it and she’d cheer me on saying ‘run mother run’.

“I’d asked to borrow her trainers to run in and she gave me her yellow trainers when I picked her up from Leeds, the day it happened. She just loved trainers and loved the colour yellow. I have run in them before and put them on a few weeks ago when I ran for the first time since the attack. It was a hard run but I felt like Courtney was spurring me on.”

Deborah had planned to run both the Leeds Half Marathon and the Great North Run this year for Alzheimer’s Research UK but she developed plantar fasciitis, a painful condition that affects the heels. She had to cancel Leeds Half Marathon but had managed to recover for the Great North Run, which would have been her first half marathon. However, she has said she doesn’t feel physically or emotionally strong enough to complete the famous race next month.

Despite not being able to run herself she cheered her new running friends on at the Great Manchester Run and has received support from them on a daily basis both in her running and offering support following the terror attack in May.

“It was really lovely to get such great support from my running group. They have been wearing yellow ribbons when they have been out running and in regular contact since it happened.

“It fills me with pride that so many people, some of whom I have never met, will be wearing a ribbon in a tribute to my wonderful daughter.”

Alzheimer’s Research UK will be providing yellow ribbons for all of its runners and supporters on the day.

“We are so proud of the support our runners offer each other not only in their running but in their daily lives. The fact that so many runners have rallied around Deborah during such a difficult time is a testament to how much of a family they have become.”

“There will be 153 runners taking part in this year’s Great North Run for the charity and we hope to see the whole team wearing yellow ribbons in a tribute to Courtney and Philip, and to show their support to Deborah and her family.

“We will be cheering each and every runner on for their efforts and can’t thank them enough for not only raising vital funds for dementia research but also for demonstrating the very best of the running community spirit.”