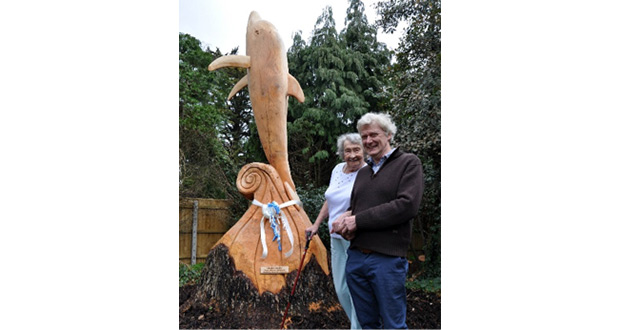 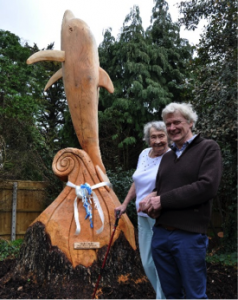 A Poole care home turned a diseased cedar tree into a beautiful, new garden sculpture – and it didn’t take a lot of fishing to come up with a theme.

The eight feet high figure was carved from the stump of the diseased cedar by environmental sculptor Paul Sivell from the Isle of Wight.

Paul took three days to fashion the dolphin, which is seen bursting from the waves. He also used an offcut of the tree to carve a leaping hare, which stands alongside Dolly.

Canford Chase manager Charlotte Wilson welcomed Paul back to the home in Western Road for the unveiling, which also saw residents enjoy a giant, dolphin-themed cake.

Charlotte said: “We were all very upset when tree surgeons told us we would have to remove our beautiful cedar tree. But when they offered to leave a stump which could be carved into something, it became an exciting new project which everyone embraced.”

She continued: “Choosing a form for the sculpture threw up some great ideas such as a World One soldier, a squirrel and a woodpecker. But the most votes by far were for a dolphin which is not only a fascinating creature, but also the symbol of Poole, representing its rich, maritime history.”

Each day that Paul was working on the sculpture residents and staff were gripped by his progress.

“It was truly amazing to see this beautiful dolphin emerging from a simple tree stump,” said Charlotte.

“Then we had to decide what to name her and we wracked our brains for names starting with a D for dolphin. Of course as soon as someone broke out into the chorus of ‘Hello Dolly’ we had it!”

Paul Sivell answered questions from residents about his work and said he had greatly enjoyed the commission.

He also joked that residents had paid such close attention to the project that many of them could probably carve their own dolphin now.