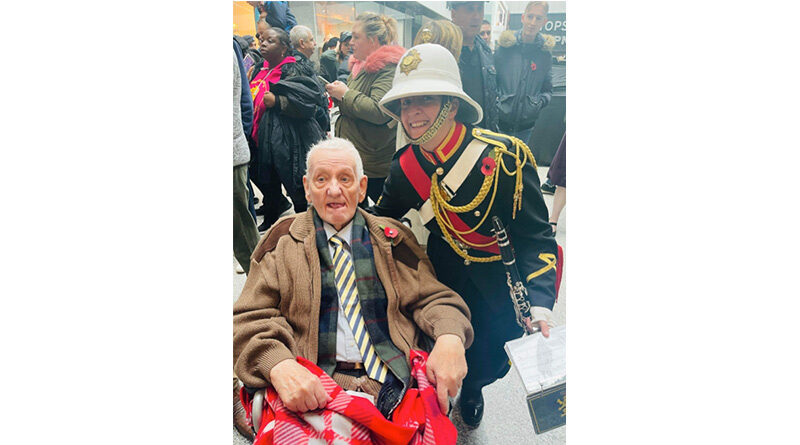 Romford Care Home believes in making those who live at the Nursing and Dementia home wishes and dreams come true; no matter how impossible it may seem.

When Resident David Bristow, mentioned to John Olival (the homes’ Dementia Ambassador) his lifelong wish to be part of Romford’s Remembrance Day procession, the team at the Nursing and Dementia Home jumped in to action.

David, as he says himself, “was born and bred” in Romford and has seen it develop and change over the years and one of his cherished memories is every Sunday going to the Harvester for Lunch with his Mum and Dad.

Part of the role of a RCH Dementia Ambassador enables them to get close to all the residents and get to know them personally, their likes and dislikes which enables them to ensure that their care is person cantered.

For John, it meant he was able to dedicate time to David and find out what his dream and wishes were, “David and I worked together to set his goals for his health and wellbeing, to get him strong enough to turn those dreams in to reality; it’s now my duty to help deliver some of he’s dreams and this is the first ticked off the list.”

So yesterday, wrapped up and proudly wearing his poppy David, John and the home’s receptionist Georgina Thomas attended the procession.

As luck would have it, in the procession was Hayley Sullivan the home’s Life Style Coordinator. Hayley who is a Sergeant in The Royal British Legion Band and Corps of Drums Romford introduced David to the Band’s Master who invited him to join the procession on the walk to the Romford Cenotaph.

It was here that David was also able to meet and chat with the local Army, Police and Air Cadets.

To end the day, John and David popped in to Weatherspoon’s for a full English and well-earned drink.

David was overwhelmed by the many acts of kindness by so many and to be part of the procession of his beloved Romford, “This is a very special day and I didn’t think I would ever get to see Romford Market place again. John is really a true friend.”

John has worked tirelessly to support David and get him back to enjoying life, “To me this is all in a day’s work, but when I heard David say that it proved that my role really does make a difference it made me realise the impact we can make. “

Next on David’s list, as a lifelong fan of Leyton Orient is to go and watch a game of football at the stadium, which the team at Romford are already trying to plan.