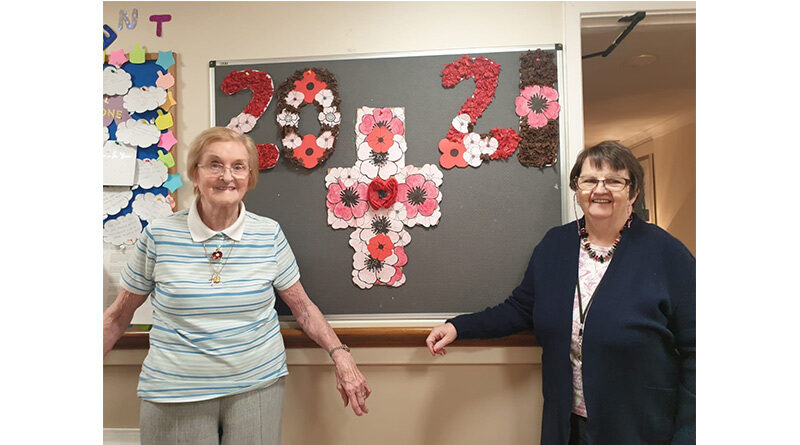 HC-One care homes across the country reflected and honoured the service and sacrifice of all those that have defended our freedoms and protected our way of life this Remembrance Sunday, which took place on Sunday 14th November.

At Trafalgar Park Care Home in Nelson, Treharris, Residents created poppy wreaths and other arts and crafts in honour of Remembrance Sunday. 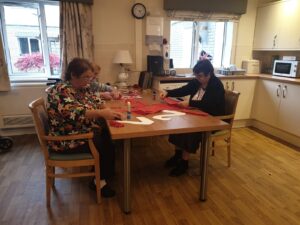 The Residents selected the colours they wanted to use on their wreaths, before sticking and collaging the shapes together to produce poppies. Working as a team, Residents cut out a wreath template from cardboard and figures to represent the year 2021, and decorated the templates with poppy flowers and tissue paper.

There was a clever production line going on as each Resident had a different job to do, and it all came together to create a beautiful dedicatory masterpiece.

Residents Sandra, Jane, Mair and Gemma all took part in the activity, while talking about the meaning of Remembrance Sunday.

“Carer, Yasmin Smith carried the activity over into the afternoon along with Colleagues Taryn Williams and Kadie Edwards, by encouraging the Residents to sing along to their favourite war time songs. It was just lovely!”

Wellbeing Coordinators, Stacey Sharples and Annmarie Roberts, provided Ashton View Residents with several small intimate services around the home for Remembrance Sunday. These included playing a video of soldiers around the world, listening to the last post and observing a two minute silence to pay their respects.

Residents came together in the quiet lounge when watching the video and indulged in tea, coffee and snacks whilst reminiscing.

Veronica, Resident at Ashton View, told everyone how she lived by where the soldiers used to pass when they were being deployed. As a little girl, she would wave them off. Fellow Resident Kath, told of her uncle who went to war and sadly never returned. Gladys spoke about her husband, who she loved dearly and who was in the Navy. 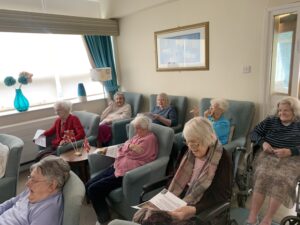 “It was a lovely day for Residents around the home to reminisce and pay their respects.

“It’s been a very touching day with stories from all our ladies and gents about how we remember the two World Wars and later conflicts.”

In respect of Remembrance Sunday, Colleagues at The Sycamores Care Home in Newton, Hyde gathered in the main lounge with Residents to mark the two minute silence.

Those who were able to, stood tall as a sign of respect, as they watched the annual National Service of Remembrance on the television, as the rest of world fell silent.

After the service was finished, everyone enjoyed a virtual show of their own, produced by Stormz Community, which was a combination of heart-touching performances and historic videos.

A variety of singers and performances were shown including famous acts such as ‘The Poppy Girls’, Dame Vera Lynn – the Forces Sweetheart’s, famous song ‘We’ll Meet Again’ and other sing-songs sung by choirs and children. Those involved enjoyed watching clips and videos of historic war times and everybody’s heart was touched.

The show brought a tear to many people’s eyes, including Colleagues and Residents but overall it was a touching and moving service which everybody deeply enjoyed.

After the show had ended, they enjoyed group discussions of memories about the two World Wars. Residents shared stories of when they served in the army, whilst others shared stories of how their parents and grandparents had served.

Renee Bell, Wellbeing Coordinator at The Sycamores Care Home commented:
“It was a great pleasure to listen to our older generation share stories and memories of the struggles and smiles they have endured over the years.

“We enjoyed watching the poppy wreaths being laid at the Cenotaph live from Whitehall in London, listening to the trumpets and the National Anthem.”