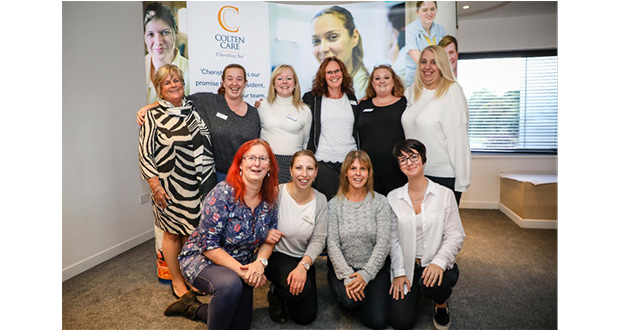 Enabling residents to live well with dementia was the key theme of a conference involving five dedicated care homes including two rated Outstanding by regulator the CQC.

Among the examples was the unbridled joy of a 96-year-old resident and lifelong motorbike fan, Joyce Ward, who had her wish for a bike ride around Winchester fulfilled thanks to the kindness of a local bikers’ club.

At the same home, St Catherines View in the city’s Stanmore Lane, staff came up with an imaginative solution after learning that one of their residents, Barry Stimpson, was not well enough to attend his daughter’s wedding in Devon.

They invited the family to come and join Barry in the home’s garden for a thoughtfully staged second wedding celebration complete with service, blessing and reception party.

As well as St Catherines View, the conference saw presentations by staff from Colten Care’s two Outstanding-rated dementia care homes – Linden House in Lymington and Fernhill in Longham near Ferndown.

Also presenting were team members from The Aldbury in Poole and Newstone House in Sturminster Newton, Dorset.

All job roles at the homes were represented in the audience including nurses, housekeepers, chefs, waiters and gardeners.

Half of those attending were new to the event.

A central strand of the day was progress with Colten Care’s dementia strategy. This involves the specialist input of an Admiral Nurse team, including Consultant Admiral Nurse Adam Smith. The team was appointed in partnership with the charity Dementia UK whose south west representative Rachel Johnstone gave a presentation.

Also presenting was Colten Care’s Music and Arts Partner, Fiona Pritchard, who discussed the creation and resident benefits of a community choir at Linden House, featured as part of BBC Music Week in September.

As well as the chance to discuss and interact with the presentations, delegates took part in a dementia-themed quiz using table-top iPads.

Linden House Gardener Chris Marsh said: “It was really interesting and enlightening to meet staff from other homes and departments to share ideas on how to care for people with dementia. The conference is a useful way to feed back to management on what works and what doesn’t. I enjoyed talking with gardeners from the other homes and comparing notes on our residents’ gardening clubs and other initiatives. For me, it’s largely about taking extra time with people to try and make them feel less lonely and more included.”

Colten Care Operations Director Elaine Farrer said: “Dementia Utopia was a great opportunity to share experiences and learn from each other, no matter the job role. Every team member at our homes supports every resident and we can all learn from looking at the experience of dementia care from different perspectives.”

Sixty-seven delegates returned feedback forms, with 100% of respondents agreeing or strongly agreeing that the conference was worthwhile and 99% saying it had exceeded their expectations