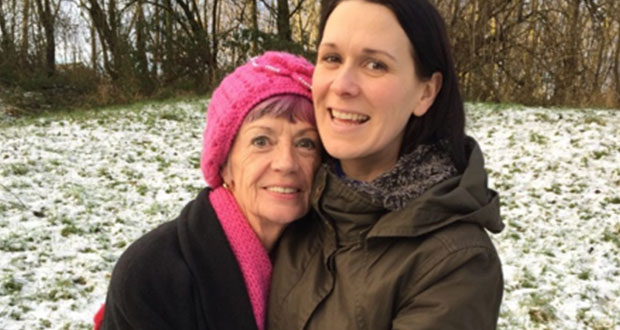 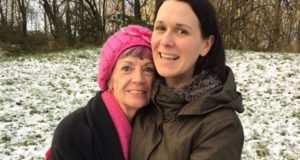 Elianne Hawley, a TV and theatre actress, is taking on Running Down Dementia, an initiative from Alzheimer’s Research UK and parkrun, which challenges participants to run 100km over the summer and raise at least £100 for the UK’s leading dementia research charity.

The 37-year-old has just passed the halfway mark of 50km and has already raised over £1,300. Elianne often runs with her husband, fellow actor Graeme Hawley, who played John Stape in Coronation Street from 2007 to 2011. Elianne and Graeme have two children, aged five and seven. She said:

“It can be hard to fit a good run in around the children, work and other commitments, but I’ve been really motivated by the Running Down Dementia challenge.”

Elianne was inspired to support Alzheimer’s Research UK after her mum, Diane Byrne, was diagnosed with frontotemporal dementia two years ago. This is a rare form of dementia which affects the frontal and temporal lobes of the brain, which control personality, behaviour and language.

Diane, who is from Urmston, was just 67 when she was diagnosed. It took about a year to get a diagnosis, leaving the family in the dark for a long time about the cause of her behaviour. Elianne said:

“It was very difficult to understand what was happening at first, as Mum wasn’t acting like herself at all. She used to get into terrible rages, had extreme paranoia, was very unpredictable and would say horrible things sometimes. She would run off a lot and lost awareness completely of what was safe and what wasn’t. We were worried every time the phone rang.”

Diane was known in her community for her bright pink hair and friendly personality. She and her husband led a busy social life, often visiting the theatre and going out for meals. She was also a proud member of the Manchester Show Choir. As Diane’s behaviour changed, they could no longer do these things. She moved into a care home in March. Elianne commented:

“Mum was diagnosed just after Dad retired. They had all those years ahead of them, but they were snatched away. There’s a misconception that dementia is something that people get in their eighties or nineties, but Mum was only 67.

“Her symptoms started not long after my daughter was born, so I haven’t had my mum there to help me in becoming a mother myself. It’s been extremely hard, but I’m so proud of my mum. I can’t imagine how terrifying this whole thing must be for her.”

Before moving to the care home, Diane was cared for by her husband, Mike Byrne, with the help of Elianne and her siblings. Elianne said:

“I wanted to take on Running Down Dementia and support Alzheimer’s Research UK because I’m determined to stop others from having to go through what we are. Since my mum was diagnosed, I’ve found so many people who have been touched by dementia too. I want to see us find something that can beat the condition once and for all. Thank you to everyone who’s sponsored me – your generosity and support has been amazing.”

“We’d like to say a huge thank you to Elianne for throwing herself into the Running Down Dementia challenge and raising such an incredible amount already. She is currently in our top five fundraisers. There are around 44 million people worldwide living with dementia, making it crucial that we find an effective treatment as soon as possible.”

To sign up for Running Down Dementia and for more information, go to: http://www.runningdowndementia.org/

For further information about Alzheimer’s Research UK, or to find out more about fundraising for the charity, call 0300 111 5555 or visit www.alzheimersresearchuk.org