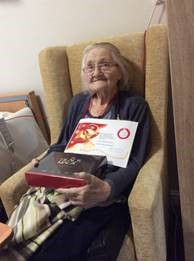 A Bristol based care home has started getting into the Christmas spirit with a wreath competition.

The idea of the competition was to get staff and residents at MHA Hartcliffe involved by working together and putting their creative heads together to make the wreath.

More than 25 residents and staff members teamed up and took part, with all wreaths being put up on the bedroom doors.

At the end of the competition, resident Barbara Eacott was announced as the winner and received a lovely gift in the shape of chocolates for all her hard work.

MHA Hartcliffe is a community-focused care home on Murford Avenue and provides care for up to 65 older people in Bristol.

The home prides itself on creating an environment where residents and day centre members can thrive.

Ann-Marie Coulthard, Quality Improvement Manager said: “To begin with some staff members were hesitant to get involved but as soon as the first wreath was done all staff members supported each other and got stuck in.

“One of the conditions to be in contention for the winning prize was each resident had to have had a partner in the form of a staff member.

“This was important as it allowed staff and residents to work on something which isn’t work related.

“When I told Barbara she had won, she was a little surprised, and selected the box of chocolates as her prize.

“I would like to thank Morrison’s who donated a lot of the materials to make the wreaths, along with some kind donations from local community groups.

“The rest of the equipment was a mixture of old Christmas decorations and some bought in by the staff.

“I do feel like this will become a tradition at the home, some staff members who didn’t have partners due to them not being well still completed the wreath and hung it up outside their door, which was a beautiful touch.”