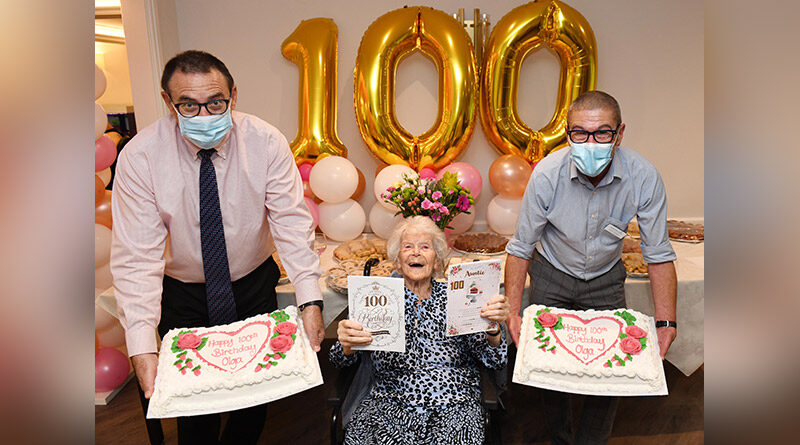 A resident at Kenton Hall in Newcastle celebrated two 100th birthdays, due to her father incorrectly registering her birthday 100 years ago!

Mother of two, Olga Brown celebrates her ‘real’ birthday on September 21 – but her birth certificate says September 20 due to a mix up by her father when registering her birth.

Olga, who almost lost her life during World War 2, celebrated with family, including some who travelled from Canada where Olga used to visit her late sister, at Kenton Hall with two cakes, two cards and two sets of balloons meaning guests enjoyed tucking into twice as many birthday treats.

During the War, Olga, who lived in Walker at the time, experienced intense shelling, eventually resulting in her home being destroyed and her family dug out of the rubble. Before one bombing raid, Olga was caught in two minds whether to grab some sausages from home before joining others in the air shelter. Fortunately, Olga decided to seek shelter, a decision that potentially saved her life.

Olga Brown said: “I’m delighted that at 100 years old, I still get to have a birthday party, never mind two in one day!

“I’d like to thank all the staff and residents at Kenton Hall for organising everything and making it a special day to remember with my lovely family.”

Steve Robson, manager at Kenton Hall, said: “It was great to see all the residents enjoying Olga’s birthday celebrations.

“When we heard Olga’s story about the mix up of her birth date, we decided to allow her to be one of very few people who gets to celebrate two 100 birthdays in one day.”