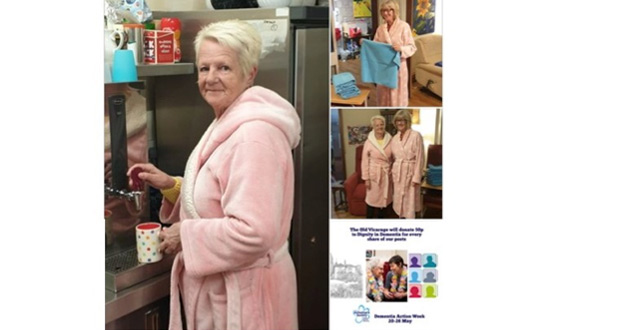 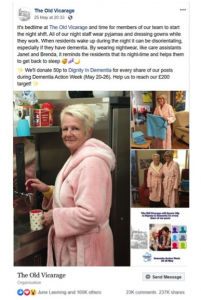 An Allithwaite care home’s Facebook post about how its night staff wear pyjamas for the benefit of residents with dementia went viral reaching 13 million people in just seven days.

As part of a campaign during Dementia Action Week, The Old Vicarage care home posted photos of its night staff wearing pyjamas and dressing gowns as an aid to remind residents with dementia who wake up during the night that it’s bedtime and so help them to get back to sleep.

“We never dreamt the post would be so popular,” said Charlotte Gregson, home manager at The Old Vicarage, who is responsible for the bedtime initiative.

“None of our care staff, including myself, wear uniforms. We feel that uniforms separate us, they are a symbol of power and control, and represent ‘doing a job’, whereas we want our residents to feel special, loved, and at home.

“Many of our residents are living with dementia and when they wake during the night it can be confusing to see lots of activity. By going about their work in pyjamas and dressing gowns, our night staff are helping to remind residents that it’s time for bed.

“It’s an idea that seems to have captured everyone’s hearts. We’ve had thousands of comments and messages from people who think it’s an amazing idea and praising us for our person-centred care.

“Many of the comments are from people whose loved ones are living with dementia, saying how confused they get at night, and that this simple idea can make such a huge difference.

“Other comments are from care workers who want to adopt the idea in their place of work. It would be marvellous to think that a post about our pyjama-wearing team might actually spark a change in how care homes across the UK support their dementia residents.”

Danielle Booker, success plan manager at Springup PR, said: “The idea behind the campaign was to amplify The Old Vicarage’s reputation and get people talking positively about the care home.

“It’s often the simplest of stories that captures people’s imagination. I knew the post would be well-received as it captures such a lovely, heartwarming idea, but I never anticipated it going viral.”

The care home encouraged people to share the post to help fund a dementia-embracing community orchestra, a new project soon to be set up by Dignity in Dementia.

Kamal Siddiqi, owner of The Old Vicarage, offered to donate 50p to the project for every post share, and agreed a limit of £200 with Dignity in Dementia, a social enterprise that runs a range of dementia embracing community groups locally and offers free dementia training and other services to families.

“We never dreamt it would fire the imagination of so many people,” said Kamal, “we were completely blown away by how quickly the post went viral.

“The Old Vicarage has been working with Dignity in Dementia for the past five years, they’ve supported us with training and helped us to improve our dementia care, and we have helped to support their amazing projects through fundraising, sponsorship and donation.”

Since the care home encouraged its followers to donate to help fund the community orchestra, the organisation has received almost £1,500 in donations.

Lesley Gill, director of Dignity in Dementia, added: “We’ve been taken aback by people’s generosity, with donations ranging from 50p to £200. We can’t thank Kamal and The Old Vicarage enough for helping us turn our idea into a reality.

“It will include a mixture of people, with and without dementia, all who have enjoyed playing instruments previously and want to make music with others again. It will provide an opportunity for them to come together in a safe environment with little pressure, to enjoy playing together and forging new friendships.

“Enjoying music is a universal experience, and one that can greatly benefit people with dementia. The orchestra aims to help members, including those with dementia, boost their sense of self-worth and feel more connected to their community.”