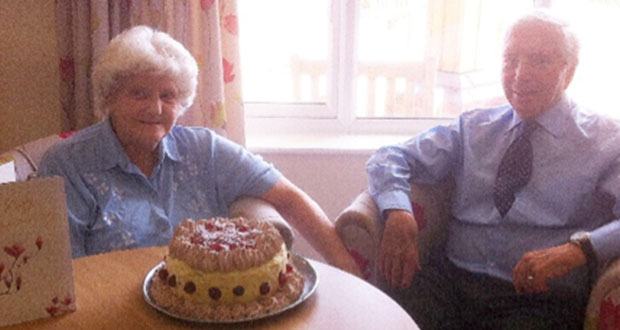 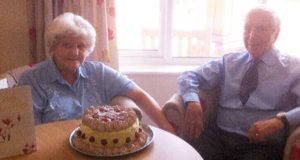 It is a special time of year for local couple Olive and Frank Jones, who were thrilled to recently celebrate their 63rd wedding anniversary in style.

Olive (90) and Frank (95), met through their families’ friendship and Olive fondly recalls the first time she saw Frank and how handsome he looked wearing his RAF uniform.  In 1951, Olive went to stay with Frank’s family and their relationship blossomed.

The pair were married on 20th June 1953 at Dawson Place, a church in Allandale, Northumberland where Olive’s parents were also married. Olive and Frank then moved to Cheshire where Frank left the RAF and joined the tourism industry and Olive worked in a number of offices as an administrator.

The couple were passionate about walking and cycling, which they always did together and were delighted to move to Dorset once they had both retired in 1987.

Staff and residents at Care South’s Wickmeads care home were thrilled to help celebrate Frank and Olive’s milestone over a celebratory tea party and a celebration cake made especially by the home’s Chef.

Both Olive and Frank have been staying at Wickmeads for respite care since May and were thrilled to share their story and reminisce about how they met with other residents and staff throughout the sunny afternoon in the home’s lounge.

Karen Taylor, Home Manager at Care South’s Wickmeads, said: “We were delighted to be able to help celebrate Olive and Frank’s special day with them at Wickmeads, it’s been fantastic to hear more about their lives together. At Care South, we work hard to make sure our residents celebrations are really special events – especially milestone anniversaries like these.”