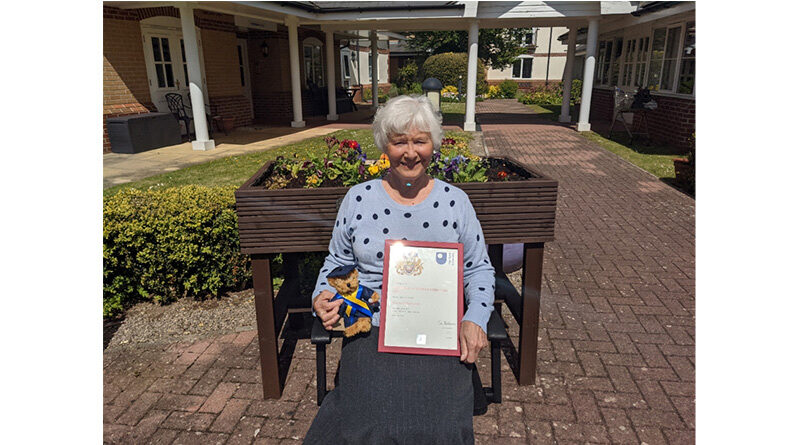 Gaynor, 75, received her BSc (Hons) Open degree in August 2020 after enrolling on a part-time course in 2014. She studied four modules of Social Science and two modules of Health and Social Care, and wants to show others that they are never too old to learn.

Gaynor said: “My grandson was 18 and going to university, and I was so envious because I thought ‘I could do this’. So I started enquiring around other universities. The Open University said they could do a degree for me because I could complete it over a longer time, and it would be geared to when I had the time available. So that’s what I did.”

Gaynor studied for 20 hours a week, learning a range of topics including geography, history, economics, law, politics, psychology, sociology and anthropology. She had to adapt to a new way of learning when technology was introduced to the course, and began attending virtual lessons.

Gaynor said: “I have grandchildren at university thankfully, so I’d ask ‘What does this mean, ‘send it over the wire’?’ My second grandson showed me how to send it digitally and it just blew my mind because I’m so used to the classroom.

There were little hands to go up, little crosses for when you weren’t speaking and the tutor would say ‘turn your video on,’ or ‘turn your voice on,’ it was such a learning curve. But now I look back and I think ‘Wow. I did that.’ And I was in my 70s, so you’re never too old to learn something new.”

Gaynor said that attending university brought her closer to her grandchildren, as they shared their experiences of studying. With the course helping her understand the pressure of deadlines, Gaynor and her grandchildren regularly spoke about their academic work and supported each other through their courses.

After six years of learning, Gaynor completed her degree in August 2020 and looks forward to having a graduation ceremony, which was put on hold due to the pandemic.

Gaynor said: “I studied four hours a day, 20 hours a week, for six years. And it was just wonderful. The course challenged my view of life and made me question my views. As you get older you already have certain ideas, but the course opened my mind to new things and it was just great.

Some of the things I learned made me angry and quite emotional because I was experiencing emotions I’d never had before. The injustices and prejudices that people face, it brought it all to light. It blew my mind.”

Gaynor first moved to Bristol with her husband and two children in 1974, and attended Soundwell College to receive her O-levels. She later became a nurse, working at various hospitals around Bristol before joining Frenchay Hospital as a pediatric nursing sister.

Frenchay Hospital paid for Gaynor to attend the University of the West of England to study Health and Social Care, and she was one of the first intakes to the course in 1992. The education she received from UWE gave her a love of learning, and she returned to education 22 years later to receive her BSc (Hons) Open degree.

Alongside studying for her degree, Gaynor has worked as an invigilator for five years at Bristol University. She moved into Brunelcare’s Woodland Court retirement village six years ago, and enjoys organising activities for the other tenants. Prior to the pandemic she ran a number of activities, including book clubs and quizzes, which she hopes to restart in the future.

When asked if she had any advice, Gaynor said: “Do what you enjoy, because if you enjoy it then you’ll stick to it. I didn’t realise I enjoyed learning until I started. I wanted to go to university because my grandson did, but once I started I thought ‘Wow, what have I missed all my life? I missed this education?’ It’s never too late to learn new skills and new things.”