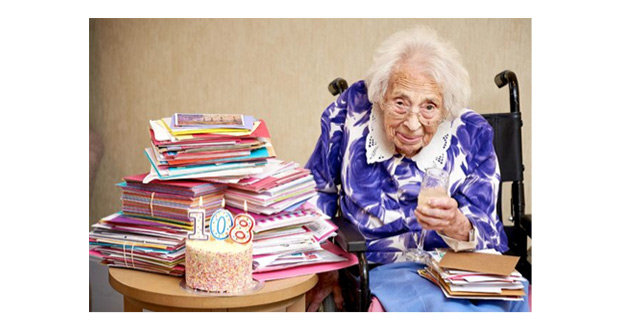 A 108-year-old has received almost 700 of birthday cards after a plea from colleagues at the care home where she lives went viral.

Dorothy Flowers celebrated her birthday on 22 October, waking up to a flurry of cards from strangers all over the world, with some coming all the way from Bangkok, Las Vegas and Australia.

As well as the 654 cards that landed on her lap, Dorothy also received a range of gifts to mark the special day including gin, champagne (her favourite), flowers and chocolates.

Speaking with the help of her carer, the centenarian, who has outlived much of her friends and family, said: “I’m lucky to have made many happy memories during my life and – even at 108 – I’m still making more.

Dorothy lived independently until the age of 104 and then moved into Bupa Southlands care home in Harrogate in 2015.

This year, staff wanted to make her birthday extra special so they put a call-out on Facebook asking people to send her a card. They were hoping for 108 cards to mark every year of her life – and were “blown away” by the huge response.

Helene Ballinger, resident experience manager for the care home, said: “It’s sad to think but, as people get older, they typically have fewer friends to celebrate with, which is why we always try and make a big effort for residents’ birthdays.

“Dorothy’s something of a local celebrity now, our letterbox has been overflowing for weeks.”

Born in Headingly, Leeds, on the 22 October 1911, Dorothy was one of two children born to Frank and Fanny Wingate and grew up in the city with her younger brother, Norman.

As a child, she attended the Leeds Girls Modern School before leaving, aged 14, to pursue a career as an accountant.

It was while she was training that she met her husband-to-be, Leonard, before joining him in working for the Racecourse Betting Control Board. The couple got married in Leeds in the early 1940s.

To help make her birthday special, staff at the care home threw two parties: one with Judith and her family including her great-great-great niece and nephew, and the other with attendees from nearby schools who sang to Dorothy before helping her open the stacks of cards.

And, as for her secret to living well past 100? Dorothy believes it’s all about the chocolate and champagne.

Discussing the latter, the care home’s Helene Ballinger said: “It’s the only thing we ever see her finish a glass of. Needless to say, we’ve been toasting her birthday – no one said life in a care home had to be boring.”