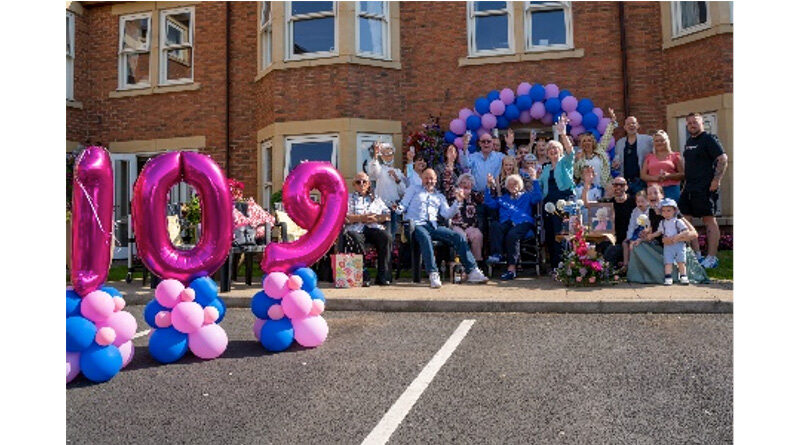 Olive Swanston Finlay, who is believed to be the oldest person in the North East*, celebrated her 109th birthday on Tuesday 3rd August at The Manor House in Whickham.

Olive was born in Newcastle in 1912, ‘the year they sank the Titanic’ as she often points out. The second oldest in a family of five children, Olive’s father died when she was only eight years old leaving her mother to raise them alone.

While working for her uncle in his Newcastle café she met her future husband James Finlay, who was known to all as Jimmy, but to Olive he was always Gee, a nickname he acquired during his Army service due to his ginger hair.

She celebrated her momentous birthday with a (Covid-safe) party at The Manor House, with family and friends and being entertained by a guest singer.  A 109th birthday card from The Queen was the icing on the cake for Olive’s extra special day.

Olive’s family paid tribute to her: “After an incredibly difficult year due to the COVID virus, we are as a family more than ever thankful to still have this amazing much-loved lady in our lives knowing only too well that many others have not been so fortunate.

“We are all absolutely delighted to once again be able to join together and celebrate yet another momentous milestone birthday with her and have all of you share it with us.

“We are incredibly grateful to The Manor House for arranging such an amazing birthday party in her honour and making it such a memorable day.”

Jane Tworkowski, home manager at The Manor House Whickham, said:  “It was such a joy to celebrate with Olive and her family.

“To reach 109 is amazing, and we are so proud to have Olive as one of our family and will pull out all the stops to give her a day to remember.”