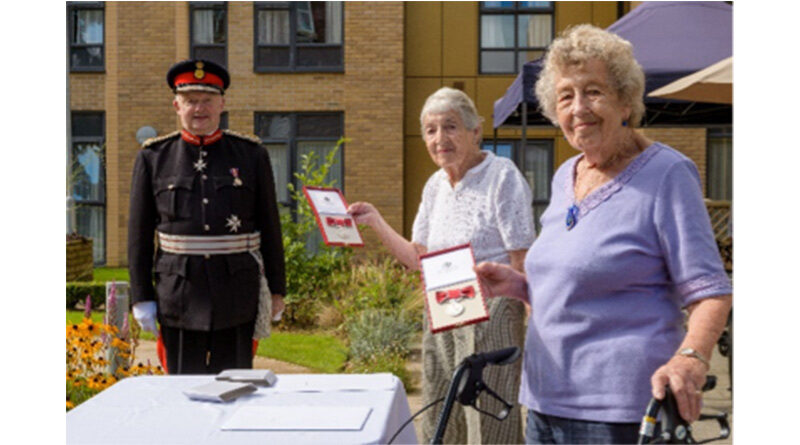 Two sisters, who fled the Nazis on a ship that was forced back to Europe, have been awarded the British Empire Medal (BEM) for their services to Holocaust Education by the Lord Lieutenant of Greater Manchester at the Didsbury care village, where they now reside.

Dedicating their lives to educating people around the world on the holocaust and plight of refugees, Gisela Feldman and Sonja Sternberg had been due to collect their medals at The Monastery in Manchester after being named in the New Year’s Honours List earlier this year. But when the coronavirus outbreak meant this was no longer possible, Sir Warren Smith, who represents the Queen in Manchester, brought the awards ceremony to the sisters with a visit to Belong Morris Feinmann on Palatine Road.

Complete with champagne, flowers and trays of kosher wine and biscuits, the outdoor event saw the sisters receive their medals surrounded by a socially-distanced crowd of friends and fellow apartment tenants. Speaking of the day, 94-year-old Sonja said: “I was very honoured and surprised to be awarded the BEM. I have spoken for many years at schools and universities, but never thought I was doing anything special. Although it’s sad my family couldn’t be at the ceremony, I feel very humbled and happy that our history will be remembered.”

Gisela, 96, added: “I was very taken aback when I initially heard we were on the New Year’s Honours list and was looking forward to going to The Monastery, but I’m thrilled to receive my medal at home, with my friends and neighbours watching. When I pass, it’s important people continue to learn about our experiences.”

Sir Warren Smith, the Lord Lieutenant of Greater Manchester, added: “Gisela and Sonja have shown amazing courage throughout their lives, educating and inspiring future generations to do better by sharing their story. It has been an honour and a privilege to present them both, on behalf of Her Majesty The Queen, with the British Empire Medal, an award they much deserve.”

Alongside their mother, Gisela and Sonja were among more than 900 Jews fleeing Germany aboard the SS St Louis in 1939. On a journey later coined the ‘Voyage of the Damned’, the passengers had hoped to travel to Cuba in a bid to reach the US but when the ship was turned away in Havana, they were forced to return to Europe.

In celebration of their awards, the sisters have been invited to attend The Queen’s Garden Parties in London next year.