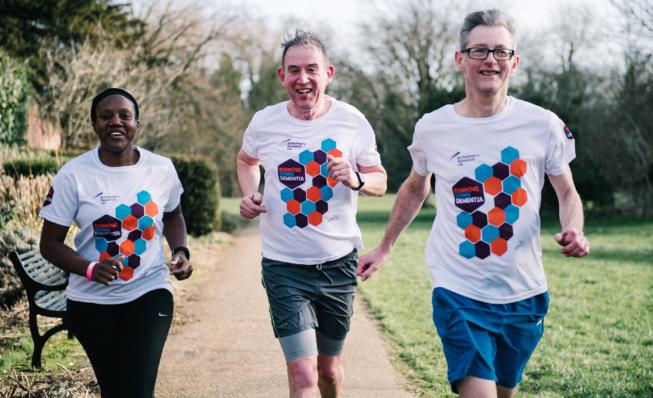 It is the fourth year the UK’s leading dementia research charity has run the award-winning campaign. For this year’s Running Down Dementia people were challenged to run 100km, 300km or their own choice of distance between the beginning of April and the end of August.

This year an incredible 4,797 took to the streets, parks and treadmills to take part. Alzheimer’s Research UK is the official charity partner of parkrun UK and around half of the people who took part in Running Down Dementia are parkrunners.

The participants clocked up 655,600km, smashing last year’s record by around 200,000km. That’s the equivalent of one kilometre run for every person providing informal care for someone with dementia in the UK today. Together, they raised £320,000, not including Gift Aid, taking the total raised over four years to around £1.1million to support life-changing dementia research.

More than half of UK adults know someone with dementia and it is the country’s leading cause of death. Most commonly caused by Alzheimer’s disease, dementia affects people’s memory, behaviour and personality. Today, there are no effective treatments to slow, stop or prevent diseases like Alzheimer’s, but researchers are working hard to change that.

Money raised from Running Down Dementia will power dementia research in the UK and across the world, to help bring about the first life-changing treatments for the condition.

Julia Sobik, Head of Sporting Events at Alzheimer’s Research UK, said: “We are delighted that Running Down Dementia has once again been a huge success.

“We are so thankful to each and every runner who took part for their amazing effort and dedication. The vital funds raised will help us to make life-changing breakthroughs possible for people with dementia.”

Alzheimer’s Research UK last month launched Swimming Down Dementia, which challenges supporters to swim a distance of their choice by the end of October. To sign up go to
www.swimmingdowndementia.org