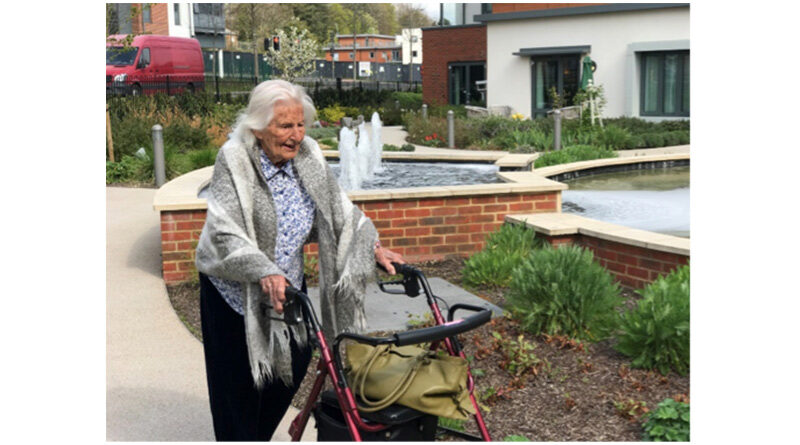 Residents at Royal Star & Garter have raised money for the charity by taking part in a series of challenges over the early May bank holiday weekend, inspired by NHS hero Captain Sir Tom Moore.

They were participating in the national Captain Tom 100 challenge, which aims to build on the legacy of Captain Tom, who last year raised millions for the health service by walking in his garden. Following his death earlier this year, aged 100, The Captain Tom Foundation teamed up with the organisers of the London Marathon to encourage fundraisers to take part in their own challenges around the number 100, between 30 April and 3 May.

At the charity’s High Wycombe Home, residents completed a 100-lap challenge around the garden fountain, while in the Solihull Home they finished a 500-piece jigsaw puzzle in 100 minutes, and covered 100 miles on outings over the weekend. In the Surbiton Home, residents wrote down 100 words of kindness.

Staff at the charity’s Central Services Office in Hampton also took part, walking a combined distance of 100km over the long weekend.

High Wycombe resident John said: “Captain Tom is an inspiration to us all. It’s nice to follow in his steps and walk in our garden to raise money.”

Audrey a resident in Solihull, helped with the jigsaw puzzle. She said: “It’s an honour to be part of Captain Tom’s legacy.”

And Bea from Surbiton said: “Captain Tom was a good man, so it is nice to write 100 words of kindness. I’m proud to have helped raise money in his name.”

Senior Community Fundraiser Lauren Baker said: “Residents and staff in our Homes wanted to do something to be part of the Captain Tom 100 challenge. And the Central Services team from our Hampton office also wanted to do their bit. It’s great to raise money and celebrate Captain Tom at the same time.”