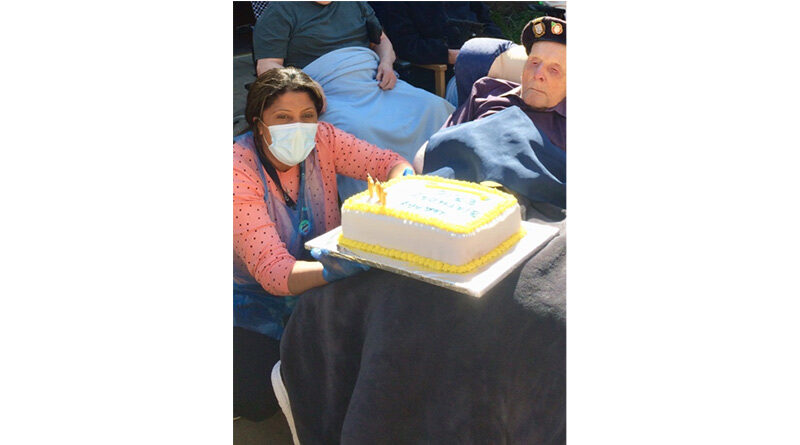 A man who served as a wireless operator during World War II has celebrated his 101st birthday at a care home in Shoreham-by-Sea.

Eric Reed, who was born in Cuckfield in 1920, recently enjoyed his birthday celebrations at Elmcroft care home.

It was his second birthday in lockdown at the home – last year, staff at Elmcroft arranged a surprise party for Eric’s centenarian milestone with cake, drinks, and entertainment.

One year on, the celebrations continued as staff, residents and family came together to celebrate Eric’s birthday, with local signer Jodie Shemmings performing a number of ballads from the 1950’s to the 1970’s in the garden.

Eric was just 20-years-old when he volunteered to join the Royal Navy, in 1940.

He took part in many naval roles during WWII, including a patrol of American and Canadian waters after the attack on Pearl Harbour in 1941. He also played football in Connecticut, after he and his crewmates were saved from a sinking ship off New York harbour, and they were given two weeks ‘survivors leave’.

Eric later trained as an electrician and opened his own shop in Worthing, where he met his wife, June, at a dance on the pier.

Monica Donald, manager at the home operated by Shaw healthcare, said: “Ever since Eric joined us at Elmcroft in October 2019, he has kept us on our toes.

“He has such a positive and determined outlook on life, and I’m so glad we could be a part of his special day.

“Current restrictions meant we had to celebrate his birthday yet again in lockdown, but he seems to have enjoyed his special day here with his friends at Elmcroft.”