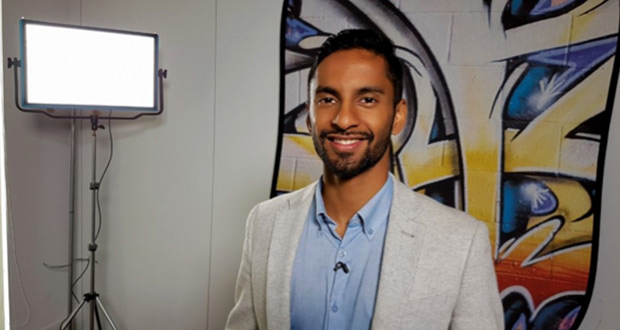 Bobby Seagull, who rose to fame on the 2016/17 series of University Challenge, is calling on people to run their own Mighty Quiz for Alzheimer’s Research UK after his team won in Newmarket last year.

Alzheimer’s Research UK Champion Simon Gibson put on the charity quiz last April to help raise funds for dementia research. He decided to ask Bobby Seagull, who was a part of Emmanuel College’s team on the long-running quiz show, if he would take part.

To his surprise, Seagull quickly said yes. He brought a team along on the night and went on to win.

Now Seagull is urging people to bring trivia to their local communities and to help fund dementia research by running their own Mighty Quiz.

“Dementia is one of the biggest health issues facing our society today, so when Simon asked me if I would take part in his Mighty Quiz, I said yes straight away.

“As fans of University Challenge will know, I love trivia. As well as offering a fun night out for everyone involved, the Mighty Quiz is also a great way to raise money for an important cause.”

“I’m really pleased to hear that Alzheimer’s Research UK is relaunching the quiz for 2018 and would definitely recommend it to anybody who wants to do something for charity.”

Simon wanted to run the quiz to help raise funds for research into dementia because his father is living with Alzheimer’s disease.

His dad was diagnosed with the condition in 2009, and now lives in a care home full-time, as his needs can no longer be met at home.

Simon is a long-time supporter of Alzheimer’s Research UK and has even released a book in aid of the charity, called A Joke a Day.

“It’s nice to do something a little bit different that people can get involved with to raise money for charity.

“The night was a lot of fun for everyone. We had a team in Chicago who took part via video call, and it was fantastic to have Bobby Seagull from University Challenge there as well.

“You don’t have to be a semi-finalist on University Challenge to take part. It’s a fun evening for all involved, and everybody has different strengths they can play to with this quiz.”

If you want to run a quiz in your area, you can register at www.themightyquiz.org and get a pack with quiz rounds and fundraising information.

There is a new quiz pack for 2018, so those who took part last year can tackle new trivial and challenges.

“We are so proud of Simon’s achievement in running his Mighty Quiz and raising so much for pioneering research into dementia.

“Our vision is a world free from the fear, harm and heartbreak of dementia, and that can only be achieved through research. By taking on a Mighty Quiz, supporters are helping us get closer to defeating dementia.”