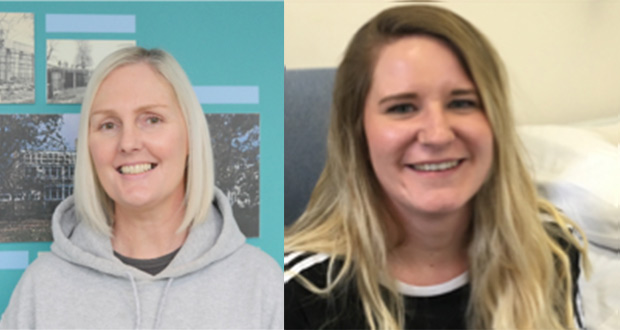 Two nursing students from the University of Cumbria have made the shortlist for the prestigious Student Nursing Times Awards 2019.

Diana, originally from Salford, who now resides in Morecambe, was nominated for achieving so much in the face of adversity.

For Diana escaped an abusive partner and evacuated her family of three children, two of whom have autism, to Morecambe from Salford in 2009.

For many years her life revolved around supporting her children. As they grew older she fought to ensure their health and educational needs were met, something that she continues to feel passionate about today.

It was only once her children had grown up that Diana found her true calling and became the first person in her family to go to university.

While studying learning disabilities nursing at the University of Cumbria, she set up an adult autism social group in Morecambe and organised a two day awareness event, which lead to her providing peer support to other nursing students and creating a learning disability nursing and autism society.

Aware that universities across the country were closing their learning disability nursing courses, Diana was keen to promote the profession further and did so by setting up a Makaton sign language choir, organised autism training for peers and with help from another student, Caitriona McPeake, designed hoodies to promote the course.

As student ambassador, she also promoted the role through talks to prospective students and open days.

“Leaving my abusive partner meant I could reinvent myself, as I no longer identified as being that person, that victim,” said Diana.

“Being shortlisted doesn’t really feel real, and I don’t think it’s really sunk in. I certainly don’t feel inspirational. I just do what I do because I enjoy it and I try to involve others in that enjoyment.

“Everyone needs to have a role model, and to think that I could be that for someone else makes me feel extremely proud, that I could inspire others to follow a similar path,” she said.

In the future Diana aims to continue running her autism social group and develop it further by exploring post-diagnostic support.

“I’d love to work as a community learning disability nurse, as there is a real opportunity within the role to build up strong relationships between the people who need support and their family and carers.

“I’m quite active and vocal when it comes to disability equality and will continue to advocate for others who may need a voice. I’m quite sure also, that this will not be the end of my studying journey, as I’m already thinking about post-graduate study. I’ll also be taking a well-deserved holiday with my family and my gorgeous dog,” she concluded.

Originally from Essex, Lucia Scull, now lives on a farm in Penrith with her boyfriend.

Like Diana, Lucia caught the nursing bug later in life having previously not settled into any one profession, flitting from performing arts, to beauty therapy in-between bouts of travelling and working in retail.

It was only after returning from a trip travelling in New Zealand that she discovered her mum had been hospitalised with depression, and that was the catalyst that piqued Lucia’s curiosity of mental health nursing.

Thankfully, Lucia’s mum made a full recovery, which cleared the way for her to pursue mental health nursing at the University of Cumbria so she could move in with her boyfriend in Penrith.

It was not without drama, as Lucia initially did not get onto her desired nursing course but the university looked at a range of interventions that would support her entry onto the course.

Lucia supplemented her already demanding course with work experience in the community, initially volunteering at her local MIND charity shop, and later becoming a media volunteer promoting the charity and raising money at events.

By her second year, Lucia became peer support volunteer at ‘The Lighthouse’ in Carlisle. A crisis centre which acts as a safe space for those in the midst of and recovering from mental health episodes.

She was approached by the manager to start a support group and that was the inception of ‘The Chatter Group’. Meeting weekly, its purpose was to include those with mental health problems and help integrate them back into society.

Speaking about her nomination, Lucia said: “I am so excited to have been shortlisted for Student Mental Health Nurse of the year and so overwhelmed that my work over the last few years has been recognised by the Nursing Times.

“I’m genuinely excited by what the future holds for mental health care, and am personally so happy to be a part of a truly inspirational professional community.”

Louise Nelson, who heads up the nursing department at the University of Cumbria said:

“As usual these are incredibly important and prestigious awards and Nursing Times have been inundated with applications. It makes Diana and Lucia’s achievements all the more impressive that they shone out as candidates in two hotly contested categories.”

“Not only are the tutors and the department incredibly proud of Diana and Lucia, they are the pride of the university.

“These students exemplify the values of care, courage and compassion that are the cornerstone of nursing and we look forward to watching them progress as they become alumni.”