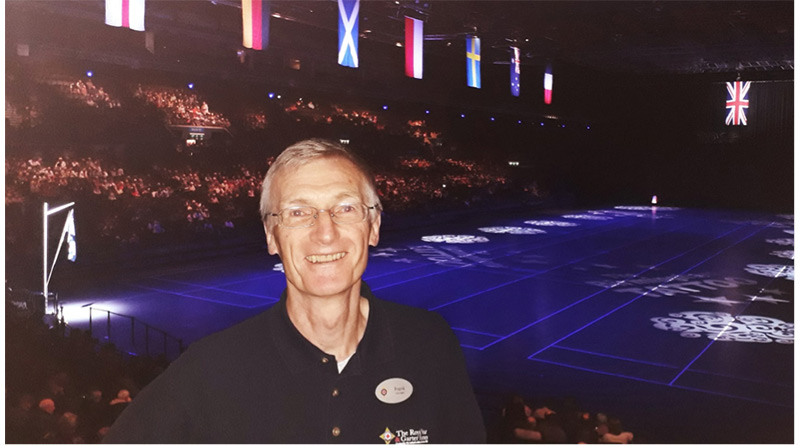 A dedicated volunteer who gives up his free time to help ex-Servicemen and women in Solihull has been commended at the Birmingham International Tattoo.

Frank Hughes was named an Every-Day (E-Day) Hero in recognition of his nine years volunteering at Royal Star & Garter in Solihull.

Frank volunteers two or three days a week at Royal Star & Garter, a charity which provides loving, compassionate care to veterans and their partners living with disability or dementia.

The E-Day Heroes award, which is new to the Birmingham Tattoo, recognises people in the local area who make a difference on a daily basis.

Frank, who was given complimentary tickets for the Tattoo in recognition of his community efforts, has been volunteering at the Home in Tudor Coppice for nine years. He helps with activities and enjoys assisting with the many outings on offer, but his favourite part of the role is befriending and chatting to residents and finding out about their remarkable lives. He also also gives his time to Marie Curie. He said: “I was surprised and honoured to be named an Every-Day Hero. It’s also an honour volunteering at Royal Star & Garter. I get a great deal from spending time and helping the ladies and gents living there.”

Charlie Wilson is the Activities and Volunteer Manager at the Solihull Home. She said: “Frank is everything we could possibly want in a volunteer. He has given so much over the years, and has formed such wonderful and very touching relationships with our residents. He is always willing to go the extra mile to help, and enhance the lives of those he meets. He truly is an everyday hero, and I am so glad his commitment has been recognised.”

Tattoo Producer Norman Rogerson MBE said: “We are particularly pleased that Frank Hughes could join us at this year’s Tattoo. Frank has been a volunteer with Royal Star & Garter for nine years and also gives up his time to volunteer at Marie Curie. We thank Frank for his valuable contribution and hope he enjoyed the Tattoo.”